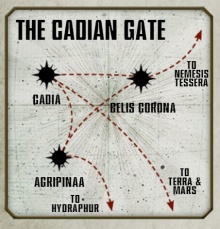 The Cadian Gate was an area of calm space leading in and out of the Eye of Terror.[1]

It was located to the galactic south-east of the Eye, and is the only predictably stable way out. It was therefore a site of frequent raids by the forces of Chaos.[1] It was not the only stable exit from the Eye; the Arx gap is another way to get out, although it was somewhat less stable. The Cadian Gate existed because of the blackstone pylons on the surface of Cadia, which had the effect of strengthening the barrier between realspace and the Warp.[Needs Citation]

During the 13th Black Crusade, Cadia was destroyed after Abaddon the Despoiler crashed a Blackstone Fortress into it. The destruction of Cadia and its pylons caused the Cadian Gate to collapse and the formation of the Cicatrix Maledictum.[Needs Citation]