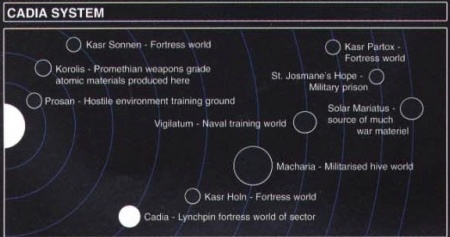 Map of the Cadian System.

The Cadian System is a planetary system within the Segmentum Obscurus. It lies at the edge of the Eye of Terror, within a narrow corridor of stable space known as the Cadian Gate.

The most renowned world of the system is Cadia, from which the Imperium guards the surrounding area against the forces of Chaos that dwell within the Eye. Its defence is vital for the survival of the Imperium.[2]

Before the 13th Black Crusade in 999.M41, the Cadian System was composed of ten planets.[2] During the conflict, Cadia, Macharia and St. Josmane's Hope were destroyed.[3] Many worlds of the Cadian System were assaulted following the destruction of Cadia itself, but the Great Exodus of Cadians helped defend many of them.[4]

Planets of the Cadian System