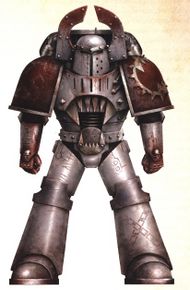 Caedere or Butchers were a type of shock infantry used by the World Eaters Legion during the Great Crusade and Horus Heresy.[1]

These warriors consisted of recruits modified with the Butcher's Nails and were the epitome of frenzied killing that Angron's Legion sought to exemplify. Caedere were Rampagers deemed too far gone to even follow basic discipline and had to be restrained between battles before being unleashed on their foes.[1]