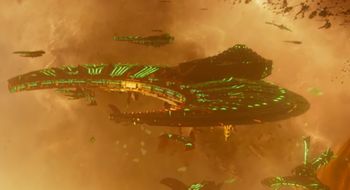 Cairn Class Tomb Ships are the largest and most powerful class of Necron warships.

At fifteen kilometers wide[1], these are the largest vessels in the Necron Fleet. They are the most powerful and heavily armed of Necron ships and are easily strong enough to destroy an Imperial Battleship. Though they are powerful, they are also rare and have only been encountered seven times. They are heavily equipped with an array of devastating weaponry, such as the Sepulchre, Lightning Arcs, Energy Drain generators, and Particle Whips.[2]

They are always part of a fleet and have never been seen without three escorts of Scythe Class Harvest Ships. They are all of the same design, indicating a well-planned and tested ship, brought to the fruition of its design. Though there are no known variants to the Imperials, there is a rumour that a Necron ship that dwarfed an Ork Space Hulk may have engaged an Ork fleet, although this may be typical Orkish exaggeration.[Needs Citation]