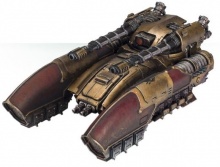 The Caladius is a type of Imperial Grav-Tank used by the Adeptus Custodes during the Great Crusade and Horus Heresy.

The Caladius pattern grav-tank was often deployed in situations requiring the heaviest of weapons the Legio Custodes could bring to bear. Well-protected and highly maneuverable, it was perhaps the most powerful armored unit of its size in the Imperium’s forces, utilizing technologies and systems derived not only from the Dark Age of Technology, but from developments made as a result of the Great Crusade’s two centuries of warfare.[1]

The Caladius Annihilator is a variant of the standard Caladius grav-tank. The Annihilator was armed with an Arachnus Blaze Cannon to deal with Super-Heavy tanks.[2] 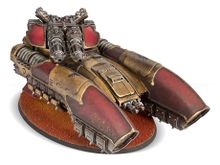