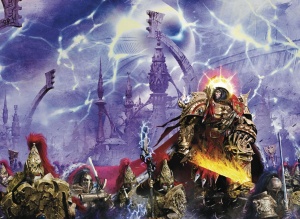 Calastar, known by its Imperial occupiers as the Impossible City, is a derelict Eldar city and one of the principal hubs of the webway. Bordering the man-made tunnels of the Webway Project, it was the focal point of the War Within the Webway.

Calastar was a city built in 360-degrees, its impossible dimensions disorienting to the human eye. The city was made up of winding pathways across plateaus and rises leading to apex structures. The chasm beneath the bridges of Calastar was determined by the Mechanicum to be so deep that anyone falling into it would die of old age before they reached the bottom.[1a]