Caliban was a Death World and the homeworld of the Dark Angels Space Marine Legion. It was a cursed but beautiful planet, being close to the realm of Chaos.

Unknown to the Dark Angels, long ago the brother to the Tuchulcha engine known as Ouroboros was embedded in Caliban's core. This may have been the original source of the planets warp-taint.[4]

Large portions of Caliban were covered with dense forests, which in turn were inhabited by many dangerous forms of wildlife. The most feared and deadly were the Great Beasts. According to Luther, Caliban possessed a vicious intelligence that extended to its "living" forests and beastly wildlife. This intelligence was in constant conflict with the Human settlers, whom it came to despise.[6]

Isolated from Terra for approximately 5,000, years the people of Caliban lived in a Feudal system. The noble class founded many knightly orders tasked with protecting the population from the hardships and perils that came from living in such a deadly environment. The greatest and most controversial of these orders was known simply as The Order. The Order differed from the other knightly orders in that commoners were also accepted into their ranks. Lion El'Jonson and Luther were both members of The Order and would rise through the ranks together until Jonson eventually became Grand Master. Prior to the Emperor's arrival Jonson and Luther united virtually all the knightly orders in a successful campaign to rid the planet of all the Great Beasts.[2]

Though not technologically advanced, Calibanites were able to produce rudimentary bolters, chainswords, energy weapons, and even power armour thanks to fragments of STC's that remained on the world.[6]

The coming of the Emperor brought much change to Caliban. Jonson disbanded the knightly orders and eventually joined the Great Crusade at the head of his legion. Vast swathes of the planet were cleared. Mines were dug and huge manufactories were built to provide for the Legion and the Emperor's Crusade. Gone were the villages and towns and in their place vast structures called arcologies were built to house the population. Much of the nobility lost their peasant farmers, and disenfranchised they turned to rebellion.[3]

Meanwhile, Luther and a large portion of the Dark Angels returned to Caliban after a falling out with The Lion during the Sarosh campaign. Bitter, jealous, and feeling abandoned, Luther had to deal with an increasingly violent rebellion by the anti-Imperial nobility. Unbeknownst to the Dark Angels, there were also Chaos-affiliated Cultists and Sorcerers who had infiltrated Administratum staff disrupting the status quo on Caliban.[3]

By the middle stages of the Horus Heresy the Terran cultists had been eradicated on Caliban, but Luther and his loyalists (most notably Lord Cypher, Astelan, and Zahariel) had gained a firm hold on the planet. Luther intended to proclaim Caliban independent from both the Warmaster and Imperium, but was plagued by the schemes and politicking. After the death of Belath Luther openly declared independence from Caliban and oversaw a purge of loyalist elements.[5]

When Jonson returned from the Horus Heresy, a withering salvo of fire knocked ships out of orbit. Over many decades Luther had corrupted the remaining legion on Caliban. Jonson was furious and moved his ships back into orbit, bombarding the planet. Eventually, Jonson ordered the invasion and the loyal Dark Angels landed across the planet. The corrupt Dark Angels took hold in the Order's monastery, and Luther and Jonson faced off. The ancient home was reduced to rubble and the planet was flattened.

Eventually, due to the bombardment, the planet's crust began to shift and crack. Around the planet, the warp shifted as the dark powers realised they had failed again and a warp storm spewed forth around the planet. A swirling vortex of warp power was created around Caliban and it eventually broke apart, being pulled into the warp. Only an asteroid with the ruins of the Fortress Monastery remained. Luther was said to be found, but Jonson was nowhere to be seen. It is said that he was taken by the Watchers in the Dark.[1] 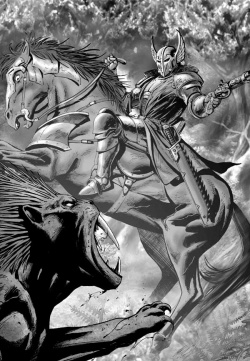 A Knight of The Order battles a Great Beast of Caliban

The deadly creatures that populated Caliban's forests and wilds, known as the Great Beasts or simply the beasts, plagued the people of Caliban for centuries, killing many and forcing the populace to be ever wary of the forests, until Lion El'Jonson and the Order launched their campaign of extermination. Each great beast was said to be completely unique, a species within itself. There also existed the possibility that they were spawned from the warp.

This seems to be backed up by Zahariel's journey into the Northwilds and the unseemly intelligence and cruelty displayed by the beasts. All of them were lethal in their own way and slaying one would mark a supplicant's acceptance as a full knight into the Order.[2]

Caliban is the name of a character in Shakespeare's "The Tempest" and also a moon of Uranus.

The character Caliban grows up alone, the only human on an island. This, combined with his ancestry (the son of a witch and a daemon), results in his wild and dangerous nature. Caliban is civilised by the arrival of a great sorcerer, but eventually grows resentful of his master and seeks to rebel under a new leader. In the end, however, he remains a servant of his first master. His character arc is notably similar to that of Lion El'Jonson.

The alternate spelling "Calibaun" is a Romany word for "black," the original colour of the Dark Angels' armour.