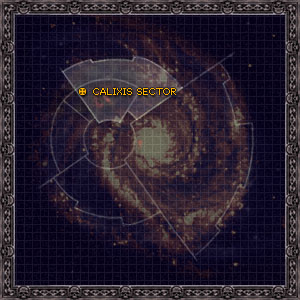 Galactic position of the Calixis Sector.

The Calixis Sector is an Imperial sector in Segmentum Obscurus near the Halo Stars and the Eye of Terror. Conquered by Lord Militant Angevin a thousand years ago, the Calixis Sector contains many heavily populated and important worlds, though it lies a great distance from the Imperium's heartland. Its first governor was Drusus, one of Angevin’s most capable generals, a man now revered as an Imperial Saint. It is the setting for the Dark Heresy Role-playing Game.

To trailing, the Calixis Sector is bordered by the hazardous territories of the Fydae Great Cloud and to spinward by the Scarus Sector. Bordering to coreward, its nearest neighbour is the Ixaniad Sector. To rimward lay the contested and unregulated frontiers of the Koronus Expanse and the Halo Stars.

The Calixis Sector is split into several sub-sectors.

The Golgenna Reach is at the centre of the sector and contains the sector capitol Scintilla.

The Drusus Marches is heavily populated with several Hive Worlds, but also wilderness and warzones on its edges, as well as the Imperial Navy station Port Wander. It also contains the Koronus Passage, a stable but dangerous warp route that passes through the Great Warp Storms separating Calixis from the Koronus Expanse, the Screaming Vortex and the Void Dancer's Roll.[1]

The Hazeroth Sub-Sector contains the Hazeroth Abyss and a several ill-omened planets.

The Josian Reach exists on the coreward edge of Calixis containing he Hive World of Fenksworld.

The Periphery exists on the spinward edge of the Calixis Sector and was the domain of Severus XIII until his secession. It is the location of the Spinward Front and the Severan Dominate. The sub-sector capital is Kulth.

The Hive World of Scintilla, situated in the Golgenna Reach, is the capital of the Calixis Sector. Along with the hellish Mining World Sepheris Secundus and the war-torn planet Iocanthos, it forms a triumvirate of worlds essential for the sector’s survival. The most powerful man in the Calixis Sector is officially Sector Governor Marius Hax, who rules the sector in the name of the Adeptus Terra from the Lucid Palace on Scintilla. However, the Calixian Conclave, led by Lord Inquisitor Caidin, is the ultimate authority in the sector, a clandestine and all-powerful presence behind the visible emblems and figureheads of power. No one has the power to gainsay the word of the Inquisition. Other important Imperial servants are Lord Inquisitor Zerbe of the Tyrantine Cabal, Cardinal Ignato of the Ecclesiarchy, Lord Marshal Goreman of the Adeptus Arbites, Senior Astropath Xiao, and Canoness Goneril of the Adepta Sororitas. The power of the Adepta, however, is rivalled by the Great Houses, the noble families and corporations, which maintain a presence across the sector. Even the minor noble houses, those whose influence is limited to a single world, hold a great deal of power over ordinary citizens.

The currency of the sector are the Thrones Gelt. There are precious shell tokens or coins of rare metals.