"To assume the shape of the accursed, and deliver death from the purity within you."

Symbol of the Callidus Temple 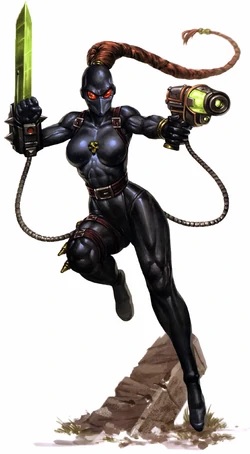 The Callidus Temple is one of the temples of the Officio Assassinorum. They specialise in trickery, deception, deceit, infiltration and impersonation.

The Callidus Assassins are the most cunning of all the assassins. Their greatest asset is their ability to use the shape-changing drug Polymorphine. This drug, coupled with special training, allows Callidus agents to change their very shape and appearance allowing them to impersonate other persons, members of the opposite sex, and even humanoid xenos like Orks and Eldar. Meh'Lindi, one of the most cunning agents, managed to successfully impersonate a Genestealer Hybrid at least twice (though she required additional surgery to complete the illusion).[1]

This makes them experts at getting close to their targets, be they rebellious Imperial Governors, corrupt Imperial high officials, heretic prophets, or alien leaders. This allows them to manipulate the enemy's plans and eventually assassinate the main target at the best possible moment. Once the target is eliminated, the Assassin may even replace the victim by assuming his appearance.[5] Polymorphine works better with women, and therefore the vast majority of the temple operatives are female.[10]

The traitor Primarch Konrad Curze, aka "Night Haunter", was assassinated by M'Shen, a Callidus Assassin. However he allowed her intrusion as he wanted to die - to show that his rebellion was justified.[6]

Callidus assassins, besides being exceptionally well-trained in martial arts, normally use whatever weapon they are able to carry in the presence of their target.[3] They would not normally use weapons other than those inconspicuous and easily concealed (digital weapons are commonly used, as well as even more unusual and exotic weapons). Even unarmed they are deadly, able to kill with a single touch. They also make use of more overt weapons such as the Phase Sword, Poison Blades, and the Neural Shredder.[7][8a] For psychological warfare, some Callidus Assassins will utilize Death Cards.[12b]