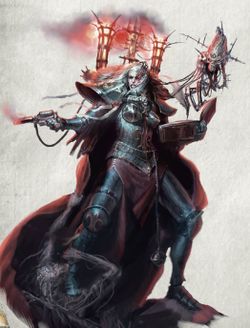 A Canoness is a command position within the Adepta Sororitas, above a Palatine and below a Prioress.[2b]

Inside the Orders Militant, the Canoness is a veteran Battle Sister who has risen through the ranks to eventually command an entire order through their qualities of command, leadership, and sound tactical and strategic knowledge, as well as no small amount of faith. A Canoness is generally the most experienced warrior in the Order, as well as a great spiritual leader. She aims to inspire great devotion in her followers, and in a combat environment can always be found at the front, leading the faithful in battle-hymns.[1b] To become a Canoness, they need not only battlefield prowess and faith in the Emperor but also tactical genius.[13] A Canoness also oversees the day-to-day activities of the sisters under her command, leads her sisters in prayer, and performs rites of initiation for new sisters to the order.[2b]

A Canoness is officially outranked by the Prioress of her order's convent, but the Prioress may come from any of the orders of the Adepta Sororitas attached to that convent, and thus is not always from the Orders Militant. Because of this, the Prioress may often defer to a Canoness on military matters.[2b]

While it is up to Ecclesiarchy religious figures to declare a War of Faith, it falls to Canoness' to oversee their actual executions. As communication and movements in the Imperium can take decades or even centuries, Canoness' have little oversight during their campaigns and must often rely on her own judgement to carry out the Emperor's will. A Canoness must also juggle the many pleas for aid that reach her sanctuary, choosing which crisis to respond to.[13]

While the smaller lesser orders may only have a single Canoness to lead the entire order, the larger orders, which often number in the thousands, break this rank down further for organizational purposes.[1b]

Traditionally, a Canoness of a lesser order is outranked by a Canoness of the major order from which the lesser order was formed.[1b] The "lesser" Canoness' traditionally oversee the spiritual and physical training of Sisters in their sanctuary. They lead combat drills, prayers, and rituals as well as commanding their warriors in battle.[13]