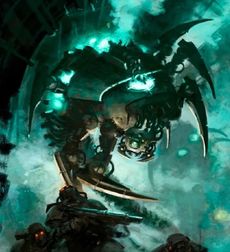 Canoptek Wraiths are a type of Necron construct.[1]

Canoptek Wraiths are the eyes and ears of the central operating systems of any Necron Tomb World, patrolling for intruders and inspecting systems for damage and decay.[1] The Wraiths are primarily probe mechanoids, programmed to report back to their Canoptek Spyder controllers via interstitial interface, rather than to act under their own cognisance. When orders are received, the Wraith carries them out with unfaltering resolve.[1]

Its primary weapon is its Dimensional Destabilisation Matrix - a phase shifter that allows it to skip in and out of reality, which was originally designed to allow a Canoptek Wraith to reach into and repair solid machinery, however, it is as effective when dealing with intruders. A Canoptek Wraith can phase its claws and Whip Coil tendrils inside an opponent, and resolidify them to sever arteries, nerve clusters and other vital pathways without leaving an external mark.[1] Wraiths are also equipped with Particle Casters or Transdimensional Beamers.[3]

Once battle begins, Canoptek Wraiths are tasked with sowing terror and disorder among enemy ranks by striking at commanders, support troops, and supply lines.[2]