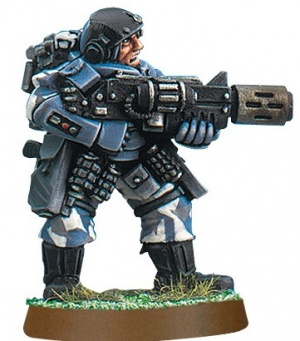 Carapace Armour refers to a type of heavy body armour used by many agencies of the Imperium of Man, from the Imperial Guard and Imperial Navy to the Adeptus Arbites, as well as individuals wealthy enough to afford it like Rogue Traders, and secessionist realms such as the Severan Dominate.[1][4][6]

Carapace armour consists of large rigid plates of armaplas, ceramite or some other strong material molded to fit parts of the body. While heavy to wear and unable to cover flexible areas such as joints, it offers far better protection over lighter types of armour such as flak armour.[2] This armour is also as much a status symbol as it is a form of protection, with the carapace breastplate worn by many Imperial Guard officers serving the duel purpose of protecting them and displaying their rank. Carapace armour can range from complete armoured suits like those worn by Storm Troopers and the Adeptus Arbites to individual pieces such as chest plates, helmets, etc.[1] Some bodysuits also include simple slots for carapace plates to be inserted, allowing the wearer to customise their level of protection or more easily replace damaged plates.[4]

The Cadian-pattern "Kasrkin" carapace suit is the standard body armour of the Cadian Shock Troopers' elite Kasrkin infantry, completely protecting the wearer's body and featuring a suite of advanced technologies. The helmet is equipped with a rebreather, photo-visor, encrypted micro-bead and clip attachment on the side for a light source or vid-recorder, while the suit itself incorporates an integral auspex unit accessed via wrist display and attachments for a grav-chute. Power for these systems is provided for by a small power pack, equivalent in size and cost to a lasgun power pack, which allows for a week of continuous use before requiring replacement. While associated with Cadia, this pattern of carapace suit has been adopted by the Departmento Munitorum for use by other units from as far away as the Calixis Sector.[3]

Although they have access to Adepta Sororitas Power Armour, the Sisters of the Orders Hospitaller usually favor lighter garb when operating outside of active warzones. On top of physical protection, Hospitaller Carapace Armour provides specialized defense against the noxious threats they may encounter as a Medicae: The hooded robes are coated in incense and ungents, while the armour itself is sealed, treated against toxins and comes with a Rebreather, integrated Surgeon Tools and Diagnostor to help the Hospitaller practice her craft.[7][8]

The Hydraphur-pattern Judge's carapace suit represents the manifestation of a Judge's authority under the laws of the Lex Imperialis. It is similar to the light carapace suits worn by regular Arbites, complete with distinctive matte-black and red colouring, but also incorporates a storm coat and massive golden eagle topping the helm. The helmet features a photo-visor, encrypted micro-bead and vox-amplifier, while a small light source can be attached to the shoulder pads. A small power pack similar in size and cost to a lasgun's power pack provides enough energy for a week's continuous use.[3]

A highly advanced, fully enclosed combat suit used by the Solar Auxilia during the Great Crusade and Horus Heresy