The Carcharodons (also known as Space Sharks or Carcharodon Astra) are a loyalist Space Marine Chapter with a reputation for ruthlessness and brutality. 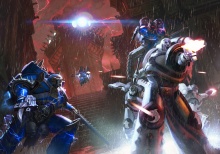 The Chapter named Carcharodon Astra — translated into Low Gothic as the Space Sharks, but known more widely as the Carcharodons — is a Space Marine Chapter of unknown provenance that has relatively recently carved for itself a dark and brutal legend in the bloody wake of the Badab War. Much of the information surrounding its history is shrouded in myth or allegory, but fragmented pieces of data point to it already being in existence as early as late M32, during the Astropath Wars. The Chapter's ancient history speaks of a "Day of Exile", a time when the Wandering Ancestors had been banished from their home world and ordered out beyond the Galaxy's edge.[7b] One thing is for certain, however: that the Chapter was given a sacred duty to travel the empty spaces beyond the Imperium's borders, seemingly forever, to seek out and destroy the enemies of Mankind.[3d]

Despite the Carcharodons' ignorance on the matter, much information suggests that the Chapter is at least partially descended from Raven Guard elements[3f] that were exiled during the Great Crusade. For instance, the Chapter uses ancient Raven Guard titles. Its Chapter Master is called the Shade Lord, a title only known to have been used by exiled Raven Guard Commander Arkhas Fal during the Great Crusade, indicating that Arkhas Fal may have gone on to be the founder of that Chapter known as the Forgotten One.[7a] In addition, Carcharodons' Chief Librarian is called the Pale Nomad,[7] a name used by the Raven Guard's 11th Chapter which was partially exiled during the Great Crusade and Horus Heresy. The 11th Chapter also used tactics which resembled those later employed by the Carcharodons.[13] In addition, the Chapter is related to the Renegade Ashen Claws which are descended from Raven Guards who abandoned the Imperium before the Horus Heresy. However, the Ashen Claws do not consider the Carcharodons full relatives, instead regarding them as "mongrel[s]", "traitor-born", "monster[s]" and calling a captured World Eater a "brother" of the Carcharodons. This suggests that the Carcharodons might be of mixed origin or even chimeric.[8f] 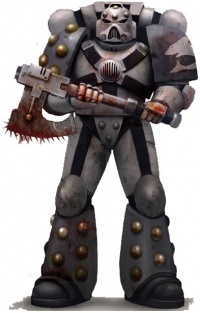 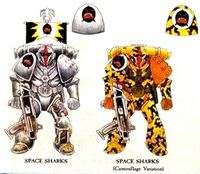 Space Sharks in their original colours[2]

The Carcharodons' entry into the Badab War was as sudden as it was unexpected. The Chapter's fleet, led by the battle barge Nicor and composed of a mix of medium and light warships, arrived without warning at the edge of the Golgothan Wastes, and was initially met with alarm by Loyalist and Secessionist alike. After a quick conference with the leaders of the Loyalists, however, the Chapter's alignment became clear, and the Carcharodons were warily accepted into forces of the Imperium.[3a]

The Chapter quickly established a bloody reputation for itself as it engaged in a campaign of systematic annihilation of the worlds of the Endymion Cluster, whose inhabitants still owed some loyalty to the Mantis Warriors. Planet after planet was placed under a scorched world policy, their infrastructure smashed and countless multitudes slain, which forced the hand of the Mantis Warriors, whose honour would not allow them to stand by and see people suffer. This played into the plans of the Carcharodons quite nicely, and soon all resistance from the Mantis Warriors was crushed, their days as an effective fighting force over.[3b]

Unable to deny their effectiveness despite his own misgivings, Commander Carab Culln gave the Carcharodons the responsibility of attacking the primary infrastructure of Badab Primaris, while the Star Phantoms prosecuted the attack on Lufgt Huron's seat of power. The Chapter interpreted the orders in their usual brutally efficient manner, and sabotaged the reactor cores of the primary hives located on the planet. The resultant tectonic upheaval broke the back of the Secessionist forces, but also kick-started the process of the world's demise. Countless Loyalists died in the hurried retreat that followed, and to this day it is said that the Star Phantoms hold the Chapter in ire for what happened[3h].

With the reign of the Tyrant of Badab at its end, the Carcharodons would return one final time to the Endymion Cluster, and aided the Fire Angels in bringing back the worlds there into compliance. With the blessings of the Fire Angels, whose dominion over the Cluster had been granted at the cessation of hostilities, the Chapter visited the Tranquility system. There their dark legend would be sealed. The hidden fortresses of the Mantis Warriors were ransacked of supplies and war materiel, and a whole generation of the system's young men were taken away to replace the losses the Chapter had incurred during the war, forced to fight each other to the death to see who would be worthy to join the Carcharodons' ranks. With that the Carcharodon fleet disappeared, apparently returning to the dark void above the galactic plane.[3c]

Since the creation of the Great Rift the Carcharodons have been granted the Mantis Warriors former Homeworld of Ootheca.[10]

The Carcharodons Gene-seed is of unknown origins but is quite unique. Prone to degeneration and mutation and exhibiting features similar to Raven Guard gene-seed, Carcharodons have a pale, almost deathly pallor. They are also known for their liquid-black eyes and vicious nature, frequently disregarding civilian casualties in conflict.[3f] Many of their ranks also exhibit extreme aggression and bloodlust, traits not usually associated with the Raven Guard. The Ashen Claws believe the Carcharodons to be of bastardized origin, suggesting that the Chapter has chimeric gene-seed. Ashen Claw leader Nehat Nev called a World Eater the "brother" of Bail Sharr.[8f] 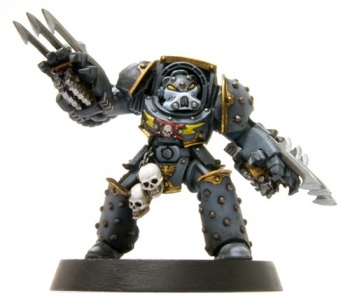 The Carcharodons roughly follow the organizational tenets laid down in the Codex Astartes, but otherwise show considerable variation with regards to tactics. In particular, their preference for shock assaults and close combat make them similar to the Black Templars, at least in the eyes of the Fire Angels Marines that accompanied them during the length of the Badab campaign. The forces observed during the war show that, on the surface, the Carcharodons were deployed similarly to what might be expected of a Codex Battle Company, although it was noted that it was augmented by an auxiliary force of Scouts, Assault Squads known as Devourers, and dedicated squads of Terminator-armored Veterans known as Red Brethren.[3f] Captains have a variety of titles, from Reaper Prime (which denotes their duty to seek out new Initiates)[7] to Harvester Prime (which denotes their duty to seek out Archaeotech)[8c] while Battle Brothers are referred to as Void Brother[8c].

Although the Chapter seemed to maintain a sizable amount of armoured vehicles, the Carcharodons as a whole seemed to prefer infantry-based strategies, relying on the battle-prowess of its Marines to carry the day. Lightning assaults presaged by reconnaissance by small scouting forces was commonly observed, with surprise often the key factor in carrying the attack through. When resistance proves too heavy or the reaction of the enemy too swift, the Chapter's forces often quickly withdraw, to avoid heavy losses and, more importantly, to strike at another direction. This is repeated again and again until a weakness is eventually found, upon which the full brunt of the assault forces are brought to bear to bring the encounter to a swift end.[3g]

The Chapter's armory was noted to consist mostly of old-style suits of Power Armor, particularly the Mark-V Heresy Pattern, and weaponry. The Carcharodons' complement of Terminator Armour in particular showed extensive modification to keep them combat worthy.[3f]

The Carcharodons are also known to recruit new initiates as well as materiel from the Renegade Ashen Claws.[8e]