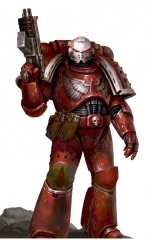 A Space Marine of the Carmine Blades.[2]

The Carmine Blades are a Blood Angels Successor Chapter.[1]

Originally known as the Swords of Haldroth after their feral recruiting world[2], the Chapter originally believed themselves to be descended from the Ultramarines for a considerable amount of time, until a chance meeting with Astorath the Grim, in late M41, revealed the truth behind their origins. With the discovery of their true Founding Chapter, the Carmine Blades had at last found an explanation for the strange symptoms, that afflicted them; which they had worked hard to conceal from those around them.[1]

The Carmine Blades are known to be savage but insular warriors.[3]