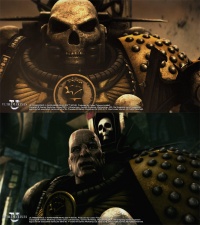 Carnak was a Chaplain of the Imperial Fists.[1]

Carnak served with the 5th Company, which was responsible for protecting the Chapter Shrine on Mithron and the Liber Mithros, an ancient Codex tome which was purportedly given into the Chapter's care by the Emperor himself at its founding.[1]

The Shrine stood for a millennium, until it came under assault from Black Legion Chaos Space Marines. For three weeks, the 5th Company held the Black Legion at bay, all the while transmitting requests for aid, until a Warp Gate suddenly appeared above the shrine and unleashed legions of daemons against them. By the time a squad of the Ultramarines 2nd Company, under the command of Captain Severus, arrived to investigate, only Carnak and his assistant, Brother Nidon, remained alive, still guarding the Liber Mithros.[1]

Carnak and Nidon fought alongside the surviving members of the Ultramarines contingent as they fought off waves of Chaos Space Marines while awaiting their extraction Thunderhawk. During the battle, Carnak unleashed the power of his Crozius Arcanum, the Stormrod, against the Black Legion to stay their advance, felling many. But as marines continued to fall and their position looked likely to be overrun, Captain Severus, who had previously fallen off a mountaintop while grappling with a daemon, arrived and seemingly saved them.[1]

However, the real Captain Severus had been killed and possessed by the daemon. As Chaplain Carnak and Brother Nidon tended to their wargear in the Armoury of the Ultramarines' Strike Cruiser, they were confronted by the possessed Severus and Brother Proteus. Severus demanded to see the Liber Mithros, and Carnak, unwilling to sour relations, relented.[1]

The Liber Mithros was then revealed to be empty, its pages entirely blank. Severus called Carnak and Nidon heretics, implying that the blank text was some trickery of Chaos which they had perpetrated, and leveled a bolt pistol at them. At this moment, the 2nd Company's Standard became alight with corposant fire, and Severus declared it proof that the daemon was present in the form of a possessed Chaplain Carnak. Simultaneously, the Imperial Fists Chaplain suddenly realized the truth - that it was Severus who was possessed - and began to reach for his Crozius, but was stopped by Proteus and shot in the head by Severus. As the dead Chaplain toppled to the ground, the daemon possessing Severus revealed itself. Brother Nidon was first to attack but was thrown aside and knocked unconscious. Subsequently, daemon-Severus fought through the Ultramarines, massacring many, before it was killed by Proteus in the Cruiser's Reclusiam.[1] 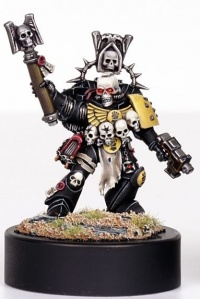 A minature of Carnak painted by Games Workshop to promote the film Ultramarines - A Warhammer 40,000 Movie

Carnak was voiced in Ultramarines - A Warhammer 40,000 Movie by John Hurt.[1]