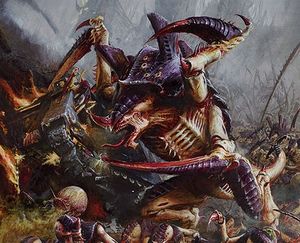 A monstrous Carnifex tears into a Rhino[2a]

Carnifexes are hulking, powerful Tyranid creatures used as living battering rams. They are often armed with the most powerful Tyranid Bio-weapons, and are used in shock assaults, spaceship boarding actions, massed battles, and for battering through fortified positions and tank formations.[1a]

Carnifexes excel at thunderous charges, where their immense bulk is used to crush or smash through any opponent or obstacle. They are not as swift as other Tyranid creatures but their brute force more than makes up for this. A Carnifex's stampede takes time to build force as their incredible alien musculature strains to propel it forward. As it builds momentum and reaches top speed, the ground shakes with each stride of the monster and foes are scattered or trampled before it, and only fortress walls or Super Heavy Tanks have any chance of surviving the ferocious impact.[1a] Most Carnifex kills registered come from high energy attacks — lascannon, plasma and melta weapon strikes to critical locations. Carnifexes can shrug off other small arms fire and even boltgun hits with minimal loss of function.[4a]

Carnifexes are not very intelligent and in fact have little self-awareness. They will revert to unthinking rampages of destruction if not constantly supervised and guided by the Hive Mind.[1a] All Carnifex species seem well able to adapt to extremes of environments, from arctic cold to desert heat.[4a]

The Imperium's first recorded encounters with the Carnifex were in the battles against Hive Fleet Behemoth that lead up to the Battle for Macragge. As the Imperium tried to stop the Tyranids in space, Carnifexes were at the head of every boarding action.[1a] The strain of Carnifexes encountered became known as Screamer-Killers because of their terrible ululating shriek, caused by rasping plates in their esophagus that were used to energize a form of bio-plasma in their gut to shoot bio-plasmic bolts, and in some instances Screamer Killers were reported using an electrical field around their claws to build up an incandescent bio-plasma ball before launching it at a target over longer ranges.[4a] The Carnifex genus actually comprises many species displaying a wide variety of symbiotic weaponry such as the Heavy Venom Cannon, Stranglethorn Cannon, and Deathspitters.[2]

There are many species in the Carnifex Genus, some of the most notable are: