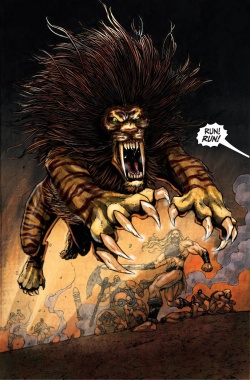 A Carnodon, a member of the felid genus, is a large species of cat from the planet of Gudrun in the Helican Subsector[2a].

The Carnodon is described as being between 800 and 900 kilograms when mature and 5 to 6 metres in length,[1][2b] with a striped pelt and large sawing tusks.[2] It closely resembles the snow leopard of old Terra, except it is much larger, and more ferocious.[5]

Notable examples of the species include: 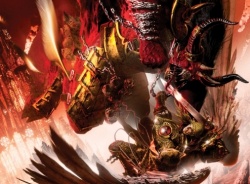 Sanguinius in the air over Signus Prime; the Carnodon pelt is visible draped over his shoulders.[5]