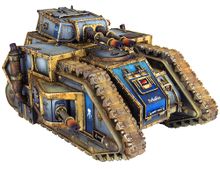 The Carnodon was a type of tank used by the Imperial Army during the Great Crusade and Horus Heresy.[1]

The Carnodon is a versatile medium battle tank which acted as the linchpin for many of Imperial Army victories during the Great Crusade. As a premier mobile fire platform, it was regularly adapted to combat a wide variety of foes and respond to any number of battlefield conditions. During the early years of the Great Crusade, it rapidly became a byword for conquest amongst the Expeditionary fleets. As the Great Crusade moved ever outwards and supply of the Aurox chassis design peaked, it is thought that many Carnodon tanks entered a strategic reserve and were distributed to Crusade mustering worlds behind the front lines; with over two hundred thousand examples thought to have been stored on Tallarn alone. During the Horus Heresy they often saw service with the second-line Imperialis Militia.[2]

Those few Carnodons that have survived the passage of the millennia are revered as links to the former incarnation of the Astra Militarum — that mainstay of the Great Crusade, the Imperial Army. With the hour so dark, and the need for trusted war assets greater than ever, the Priesthood of Mars has reinstated the STC for the Carnodon on several forge worlds, and under the light of the Great Rift the ancient tank has trundled forth from their manufactorums once more.[3]