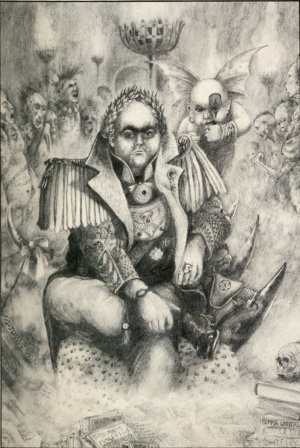 Lord Helmawr accompanied by a caryatid.

Caryatids are small, winged, blue humanoid creatures which infest the many air-ducts and vents throughout Necromunda's hives in great numbers.[1a]

They are seen as good luck charms by many hivers, as they tend to attach themselves to charismatic, powerful and successful individuals: for example, very successful gang leaders and their henchmen are often attended by several Caryatids and Necromunda's Planetary Governor Lord Helmawr was known to have at least one.[1b][2]

Mildly psychic, they are particularly attracted to the soon-to-become-powerful and can penetrate human minds, usefully recognising malicious intentions against their companions (and sometimes even fighting alongside those they latch onto.[3a] Although they are a sign of good fortune of those they adopt, an individual whose 'pet' caryatid leaves them is regarded as waiting for death, as the departure is seen as an omen of doom.[1a][2]

Caryatids' blue skin is generally covered by an intricate, tattoo like pattern, and some are known to paint their faces (such as Lord Helmawr's) and wear bracelets, bangles, anklets and ear rings. As well as fighting with small auto weapons, they have also been seen to carry light sources, such as a candle.[1b][2][3a][3b]

They should not be confused with the artificially constructed Cherubim sometimes used as familiars by psychic Inquisitors which are also sometimes seen in the Underhive, though it is less clear if they are related to other small winged humanoids found elsewhere in the Imperium such as those which ring bells and bear incense in the Imperial Palace.[4][5] 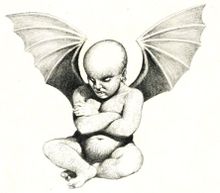