The Tau caste system is a system of social division that divides all Tau into five distinct groups.[Needs Citation]

Each caste is named after an element of nature, symbolising the purpose and temperament of the caste's members. A Tau's caste is determined at birth and inherited by one's parents. Inter-breeding is forbidden by the Ethereals. For a Tau to choose another caste for himself seems to be impossible, and held contrary to the notions of the Greater Good. The castes are based upon the racial and political divisions that separated the Tau on their homeworld of T'au during the time of the Mont'au. The Castes were first formally established after the Ethereals brokered peace between warring Tau factions at Fio'taun. Emphasizing the need for the Greater Good, the Ethereals decreed that the Tau would be formalized into a caste, each known by the element that most befitted its role in the new Tau society.[6a]

Members of the Fire Caste are the warriors of the Tau Empire, and as such are most often seen on the field of battle. They have been bred to be the strongest and most aggressive Tau, and weak strains are quickly weeded out. These traits come from the Fire Caste's origin on the plains of T'au, where they were hunters and warriors. Fire Warriors, as soldiers of the Fire Caste are known, spend their entire lifetimes in battle or preparing for it, constantly honing their tactics and working to improve their skills. The strongest of the strong are those Tau from the world of Vior'la, who have slightly greater muscle mass because of the stronger gravity of that planet.[6a] The Fire Caste guided by the Code of Fire — a doctrine of loyalty, martial arts and merciless war tempered by wisdom.[6a][9a]

Rising through the ranks

Provided the warrior survives four years of active duty, he undergoes the first Trial by Fire, which can be anything from mere gladiatorial affairs to trial by constant combat. If the Shas'la survives his first Trial by Fire, he is promoted to the rank of Shas'ui, or Veteran. For every consecutive four years of service, the Fire Warrior undergoes another Trial. The higher one's rank within the Fire Caste, the more likely one is to become a Battlesuit pilot.[6b] Only those Fire Warriors who prove themselves in battle and pass their first Trial by Fire are eligible to don the Her'ex'evre or Mantle of Heroes and pilot the battlesuit.[8b] Upon attaining the rank of "O", a member of the Fire Caste may be allowed to retire from active duty and become an advisor to the Tau military's command structure, the Shas'ar'tol. Other than death, this is the only way to leave the Tau military.[6b]

Notable members of the Fire Caste

This caste provides for the manufacturing, agricultural, industrial, artisans, and engineering needs of the Tau Empire. By far the largest caste in sheer numbers, it is they who erect dwellings, provide food, and produce new technology. Members of the Earth Caste are often described as plain and dour, possessing a rather stoic outlook on life in general. They were originally the first Tau to build cities and practice agriculture. The city of Fio'taun is an example of this, being the first place where the Ethereals appeared.[6a]

Notable Members of the Earth Caste

The Air Caste is charged with holding the Tau Empire together through the Kor'vattra, the Tau Empire's merchant and war-fleet in addition to operating Tau Orbitals and Fortress Stations. Formerly functioning as messengers, these days they are the Tau Navy and are sometimes called the "Invisible Caste", for they rarely if ever set foot upon planets. Living in Orbital Cities, Tau of the Air Caste are the tallest and most slender of all Tau, with long, skinny limbs and hollow bones developed due to lives lived mostly in low- and zero-gravity ships and space stations. In the past, before the time of the Mont'au, the Tau that originally became the Air Caste had membranes stretching between their limbs, allowing them to glide on air currents. Tau pilots tend to be superior pilots compared to their human counterparts because they have a better depth perception and higher G-tolerance, but lack battle-experience compared to the best Imperial fighter-pilots.[6a]

Notable Members of the Air Caste

The Water Caste serve the Tau Empire as traders, merchants, public servants, bureaucrats, administrators, diplomats, and ambassadors. They interact with other races when such affairs are not handled by the Fire Caste, and often act as administrators of Tau worlds in the absence of an Ethereal governor. Like water, Water Caste bureacrats fluidly move between other Castes and alien races incorporated within the Empire to make sure that it flows smoothly. The Water Caste are known for their great linguistic, diplomatic, and negotiation skills. Members of the Water Caste are often the ones who initiate first contact with new species encountered by the Empire, skilfully negotiating their union with the Tau.[6a] The members of the Water Caste has a gift for linguistics that has become more and more developed over time, so they able to learn alien languages with ease and show a remarkable ability to emulate and pick up subtlest of communication features.[9a]

Notable Members of the Water Caste

The Ethereals serve as "philosopher kings", and guide the other castes, as well as alien member-races of the Tau empire, towards the enlightenment of the Tau'va, the Greater Good. They serve as the undisputed rulers of the Tau Empire. Their unique role is a combination of spiritual and political duties, and their declarations shape and steer every action of the Tau Empire. Were an Ethereal to order a Tau to kill himself, he would be met with instant obedience.[6a] Ethereals themselves rule from the Ethereal Council, with the Ethereal Supreme being the highest ranked of the Caste. They are in turn protected by the Ethereal Guard.[Needs Citation]

Notable Members of the Ethereal Caste 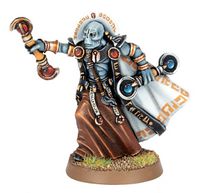