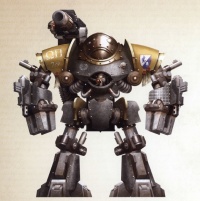 Castellan Class Robots were a type of war robot deployed by the Legio Cybernetica.[1]

Designed for anti-vehicle and siege work, the Castellan is an assault Robot useful for a wide range of battlefield roles. Its twin power fists and heavy bolter give it a dangerous punch, protected by a power field/synchroniser unit. It can substitute its heavy bolter for a lascannon, melta gun or third power fist, while the standard fists can be replaced with a Siege Hammer, autocannons and flamer.[1]

The most numerous pattern of Castellan Class Robot are the Castellax Battle-Automata[2], which are designed primarily for siege and shock assault operations and are known for a particularly aggressive Machine Spirit.[2] The Thousand Sons operated a unique variant of the Castellax class known as the Castellax-Achea.