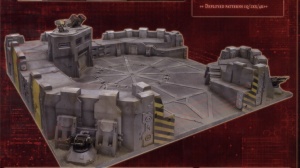 The Castellum Stronghold was a prefabricated quickly-assembled base and defensive strongpoint used by the Legiones Astartes during the Great Crusade and Horus Heresy.[1]

Consisting of interlocking modular fortifications, the Castellium Stronghold was intended for frontline use after being quickly deployed from orbit by landing craft. The base could be quickly assembled, even under enemy fire. The individual components were deployed in drop cradles clad in ablative armor, the remnants of which are jettisoned at the moment the sections landed. The Iron Warriors and Imperial Fists were known to take pride in their ability to quickly assemble the stronghold. Skillful Space Marine forces could have the base completed in as little as 30 minutes.[1]

Castellum Strongholds were deployed for short-lived but high intensity operations where the Space Marines needed to establish a fortified base in highly contested warzones. It served as a firebase, artillery redoubt, strongpoint, command center, and mustering station. Sometimes the bases would be dropped far to the rear of enemy lines, causing confusing and forcing their foes to divert forces from their frontline to protect their rear.[1]

The Stronghold itself consisted of a primary bunker and three bunker annexes. Each point were equipped with weapons emplacements equipped with Heavy Bolters, Heavy Flamers, Lascannons, Hyperios missile launchers, Whirlwind Multiple Missile Launchers, Multi-Meltas, or Quad Guns. Heavier weapons such as Icarus quad Lascannons and Battle Cannons were also deployed. For support systems, the bunker was equipped with shielded gate barriers, a comms relay, and a signal jamming array.[1]