"One of the most dangerous and perilous ordeals known to Mankind."

Catachan is the most infamous and lethal Death World in the entire galaxy.[3a]

It is located in the Ultima Segmentum and is covered in dense jungle. The planet's entire ecosystem seems consciously hostile to all foreign life. Each and every element of the native flora and fauna of the planet represents a real danger to any human, even Space Marines are said to avoid this hellish place. Catachan has no need for the Planetary Defense Forces utilized by other worlds, its flora and fauna being sufficiently deadly to thwart attackers without the need for human intervention. The planet is known to house the single deadliest creature in the galaxy, with some of its native wildlife even being released on other worlds to dissuade invasion. Catachan's only valuable resource is its people, who by virtue of being born on the harshest world in the Imperium, are invariably tough and cunning. It is the homeworld of the hulking and fearsome Catachan Jungle Fighters of the Imperial Guard. For the death world’s finest, Humanity’s wars present no greater hardship than they face daily, so they proudly answer the Emperor's call to arms.[1][16][17][21] 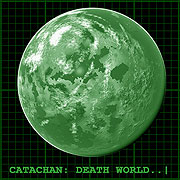 Catachan was colonized by humans longer than Imperial records can remember. When the first probes arrived, the planet was a deceptive, calm green orb from orbit but when the colony ships crash-landed and the colonists had no way to escape, they awoke to find themselves on one of the harshest planets in the galaxy. The colonists only barely survived, holed up in their spacecraft against a living, besieging jungle, a battle for survival in which many undoubtedly died.[1]

Currently, the few settlements which can hold back the jungle forces are giant fortresses surrounded by vast plains which have been cleared to give improved lines-of-fire. Building on Catachan is difficult as vines and lichen take hold anywhere and poisons melt the mortar and vines can crush bunkers and tanks. Buildings must constantly be rebuilt; it seems that wherever they build, the jungle redoubles its efforts to destroy them. As well as the jungle, the native wildlife gather to repel the human invaders and eventually the numbers grow enough to push the humans out of their settlement so they must resettle elsewhere.[1]

In such dangerous surroundings, children are quick to learn survival tactics and only those who are fast and have a good natural aim survive to adulthood. Children often learn to shoot before they walk, and must be deadly fighters in their own right by the time most normal humans learn to spell.[1][15]

During the Thirteenth Black Crusade the Death World found itself in the path of both a wounded Void Whale and a Waaagh! led by the Freebooter Kaptain Badrukk. However due to interference caused by the Warp Storm Bas Infernia, the Imperium was unable to warn the Catachans of the threats heading towards them.[10] During the formation of the Great Rift, Catachan was caught within the malignant rift and exposed to Daemonic invasion. However when Guilliman's Indomitus Crusade arrived, they found that the local Catachan regiments had already dealt with the threat.[11]

All of the animals and plants on Catachan are geared in some way to destroy humans and any other invaders. Every plant is poisonous, making foraging impossible. Some plants secrete pollen into the air which is poisonous and destroys air-filters. Others secrete sticky liquid to capture passing animals and slowly dissolve them. Other plants poison the ground and turn the immediate area around them into boggy wasteland to trap invaders. In the jungle, even the slightest scratch can prove fatal as necrotic bacteria swarm in to putrefy it. The native animals are as deadly to humanity as the plant life, the Catachan Devil with jaws as big as a tank is a major threat to human living centres. The giant Shambling Mamorphs of the volcanic regions are also considered to be a major threat.[1][15][18]

On Catachan even the climate itself is considered deadly towards all human life.[22]

The threat of disease is also a constant hazard on Catachan, as there are many kinds of poxes and fevers that can kill a man within a few hours. Many of the planet's native insects also carry virulent diseases on top of being venomous, meaning that a single bite can be lethal in more ways than one. The world does not just breed diseases in its fauna. Most of the more dangerous microbes cannot be seen at all, floating through the air until they find a host and enter their bloodstream. There are swamps where a single breath of the fog will burn a person's lungs out, causing a long and agonising death. Even the water itself on Catachan can prove fatal to drink as diseases and poisons flow through it. Foot Rot can occur after a few weeks within the jungle, where the rotten feet will detach from the legs, producing a vomit-inducing stench. Many Catachans consider disease to be a greater enemy than any beast or monster.[20][8][24] 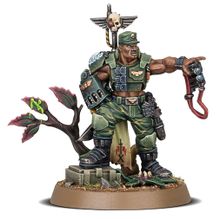 The people of Catachan are not only hardy, but pragmatic, with an easy grasp of realities and an uncomplicated attitude towards danger.[6] They are also somewhat disdainful towards people from other worlds, believing - with good reason - that few others in the galaxy have had an upbringing as dangerous as their own.[3b][7]

Catachans are known for being both physically and mentally resilient on a level that normal humans simply cannot match. Due to their heavily muscled physiques, they are often nicknamed "Baby Ogryns" by other Guardsmen, although never to their faces, as it often results in serious injury.[12][13][14]