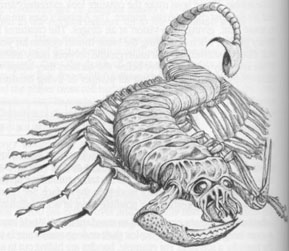 The Catachan Devil is a creature native to the Death World of Catachan, but has been introduced into several other worlds. Devils are are massive, brutal killing machines that are scorpion-like in appearance, with a series of segmented body sections carrying pairs of legs and a terminus in a long tail with a poisonous barb, which curves forward over the creature's back. As Catachan Devils grow, they develop more and more mid-sections and pairs of legs. A fully grown adult can have up to thirty sets of legs, and can reach up to thirty meters in length.[1][5]

The front legs of older male Devils become grossly enlarged, resembling scorpion claws. These mighty beasts are often dubbed 'Fiddlers' in Catachan slang, and are quite rightly feared for their ferocity and raw power, being the deadliest of their kind. The head of Catachan Devil is small and pointed with green luminous eyes.[3][5]

They are able to move with surprising speed for something of their size, being superbly adapted to move across a large variety of terrain. Once capturing a victim, the Devil will shred it with razor claws or, alternatively, will sting into insensibility with short tentacles, located around its maw. The mouth itself is extendable and consist not teeth but a bony hooks, lining around it and tearing apart the meat of prey. The victim will then be consumed.[3][5]

Catachan Devils are territorial, yet quite sociable creatures, tending to form into nesting groups. These groups often contain several large Devils, as well as a few dozen or so of 'Devilspawn' (younger Devils) who, whilst physically weaker, can burrow underground to ambush their victims. Devils and Devilspawns are able to blend into foliage silently and swiftly, all but invisible to the naked eye. The entire nest will come together to defend their territory from any intruders, be it rival Devils, colonists, or other predators, and they have even been known to attack Imperial Guard Tank Companies.[2][5]

For many years Catachan has been prized by the Imperium for the excellent training that its denizens provide to the units of the Imperial Guard formed there and has often sought to further utilise the sheer killing power of the Devils. Though the Imperium has been unsuccessful in training or taming them, Devils have often been introduced to Imperial worlds in order to dissuade invaders. This proliferation has inevitably led to escapes, and there have been rumoured sightings of Devil nests on Hive Worlds and colonies all over the Imperium. Such is the infamous lethality of this creature, that the Catachans have named both their most fearsome knives and deadliest soldiers after it.[4][5]

It is rumoured that Devils are the descendants of a long-lost Tyranid Vanguard organism that has effectively become feral.