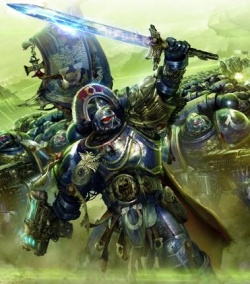 Captain Cato Sicarius of the Ultramarines during the Damnos Incident.

Cato Sicarius is the Captain of the Ultramarines Victrix Guard. Among his titles are Master of the Watch, Knight Champion of Macragge, Grand Duke of Talassar, and High Suzerain of Ultramar.

Born into one of Talassar's ascendant houses, Sicarius, as soon as he came of age, trained in various forms of martial arts common in Talassi nobility. His combat prowess became a major factor in his inclusion in the Ultramarines. Sicarius excelled at his training and claimed many commendations, quickly rising through the ranks of his martial arts community. Sicarius eventually rose to the rank of Sergeant, serving as an Assault Marine in the 8th Company during the Damocles Crusade alongside Numitor. During the war, Sicarius executed Guardsmen who retreated from the Tau and expressed a cold ruthless violence.[12] He later became the honorary Knight Champion of Macragge, and then the Captain of the Fifth Company and Master Of The Marches.[6]

Due to the death of First Captain Saul Invictus and the complete destruction of the his First Company at the Battle for Macragge, the Second Company's Captain, Severus Agemman, was promoted to rebuild and lead the First Company. Subsequently, Sicarius was promoted in Agemman's place as the new Second Company Captain, while Caito Galenus succeeded Sicarius as the new Fifth Company Captain.[2a]

After Sicarius took the mantle of Second Company Captain, his first actions took place in the Dantaro Campaign. Fighting on Masali, Cato Sicarius used the unexpected tactic and score of Land Raider Prometheus to beat the Eldar army that ravaged planet's population.[8]

During his various military campaigns Sicarius gained many honors. Among the most famous of these being the Imperial Laurel after the Crusat Minor Planet Strike (733.M41), and the Honorifica Valorum after the Battle of Dyzanyr. During a nine-day battle Sicarius gained the Valor Crest (an honor which is only awarded for near-suicidal acts of bravery) in the Battle for Fort Telendrar. The colours of the crest match those of the noble Talassi house Sicarius was brought up in. [2x]

Soon after Sicarius became Captain he was announced the Suzerain of Ultramar in 849.M41 which allowed him to gain control within the Ultramarines hierarchy[2x]. Hero of the Medusa V Schism, Sicarius's first mission was to deploy his forces across the planet in defensive formations and to release his vessels to hunt down any space traffic that might be related to enemy forces of Orks, Eldar, Tyranids, Tau and Chaos. After a long and bloody campaign Sicarius issued an Exterminatus for the dying planet.[3]

Sicarius's most famous battle to date stands as the Assault on Black Reach against the Ork Warboss Zanzag. The whole of the Second Company stood against ten thousand Orks. As their ammunition ran dry the Ultramarines fought with knife and chain sword until the last Ork fell.[1a] During the epic space battle in the Halamar Rift, the Strike Cruiser Valin's Revenge destroyed most of the Chaos Space Fleet, but during the battle aboard the main Chaos vessel Sicarius failed to kill the Daemon Prince M'kar, who escaped back to the Eye of Terror.[2x]

On the resource rich planet of Damnos in the year of 974.M41, Sicarius led an Ultramarine assault onto the planet against the recently risen menace known as the Necrons. Sicarius split the Second Company into three separate squads; he led one against the heart of the Necron force at Kellenport's Outer Walls. Upon landing Sicarius's team was surrounded by phalanxes to guard the Necron Lord. During the battle Sicarius fell, gravely wounded by the Lord's War Scythe but was rescued and was evacuated back to his Battle Cruiser to heal. Damnos was lost to the Necrons but due to the unstable reactor of the planet and thanks to a few Thunderhawk Gunships the reactor blew and took the Necrons and Planet to their deaths. This event is referred to as the "Damnos Incident".[1b][2x]

After months of healing and finally returning to active duty Sicarius led the Ultramarines and thirty other Space Marine chapters and Imperial Guard forces during the Zeist Campaign against the invading forces of the Tau Empire. The Tau was expanding their empire on to Imperial Worlds, of which they had captured 26 worlds. Numerous forces from the Night Watch, Halo Dragons, Silver Skulls, Crimson Fists and numerous others joined Sicarius on Praetonis V to stop the incoming forces. Sicarius fought back with the same tactics that the Tau used, being speed and precision. The combined Astartes strike-force managed to reclaim all the worlds annexed by the Tau and obliterate the invading forces, although the high council withdrew the chapters before the strike-force could launch a counter-assault on Tau occupied worlds; a much larger battle was brewing.[2x]

Upon returning to Macragge the siege against Ultramar was already underway by the M'kar The Reborn and the forces of Chaos. Each Company of Ultramarines was dispatched to the planets that were under attack, although Marneus Calgar himself accompanied Sicarius and the Second Company to defend the storm-wracked planet. After a long and perilous battle, M'kar was finally defeated by Calgar, who swore to slay M'Kar a hundred times over if need be. [2x]

Sicarius still leads the Ultramarine Second Company to this day, and it is believed by many he may be the heir to Marneus Calgar's position as Chapter Master of the Ultramarines - which many assume must displease First Company Captain Agemman.[2x] In late M41 his heroism was displayed once more when he lead his Second Company against the Daemon Prince Kor Megron in the Battle of Eagle Gate, being heavily wounded by Megron but still managing to personally banish the Daemon to the Warp, after a lone guardsmen sacrificed himself.[4] 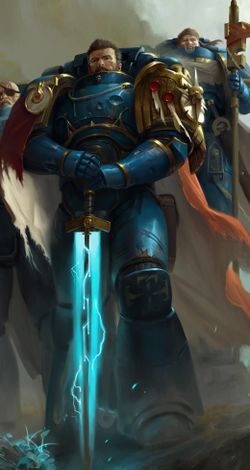 Cato Sicarius during his journey to return to the Imperium[14]

In 971.M41, Sicarius, along with Captain Erasmus Tycho of the Blood Angels was part of the second attack on Malodrax in support of the Imperial Fists to bring Warsmith Shon'tu of the Iron Warriors to justice.[5] In 999.M41, Sicarius and the 2nd Company were able to reclaim Damnos for the Imperium after slaying the Necron Lord known as The Undying.[7]

Later during the Terran Crusade Cato Sicarius accompanied his reborn Primarch Roboute Guilliman on the long and hard journey to Terra.[9]

Lost in the Warp

At the start of the Indomitus Crusade, Guilliman feared for the safety of Ultramar due to the formation of the Great Rift and dispatched Sicarius from Terra to safeguard his realm. Cato's small fleet consisted of the first Primaris Space Marines of the Ultramarines and was dubbed the Fleet Avenger. However while en-route to Ultramar, the fleet encountered severe Warp Storms on a scale not seen since the Age of Strife. During the chaos, Sicarius ordered each ship to make its own way to Macragge. Sicarius was aboard his own Strike Cruiser, Emperor's Will, when the Astronomican malfunctioned. The last known message from the vessel before it was lost in the Warp was "They have breached the hull, they are here". Sicarius was declared missing by the Ultramarines, and Captain Acheran has assumed leadership of the 2nd Company.[10]

Stranded in the Warp, Cato and the crew of the Emperor's Will endured waves of Daemonic incursions and raids of Chaos Space Marines. They had to endure this nightmarish situation for nearly five years, with most of the moral crew dying or going insane and the warriors abroad the Emperor's Will losing nearly all of their ammunition.[14a] Desperate, Sicarius ordered the Emperor's Will translate back to the Materium, at which point they find themselves over a Feudal World with a Human population unaware of the greater Imperium. Looking for supplies and support, Cato leads an expedition down to the planet. Wishing not to create a panic, they identify themselves to the confused locals as Knights from the lands of Macragge and find that the humans of this medieval world have been fighting Feral Orks for centuries.[14b] Cato discovers that the city ruler to be a Necron slave controlled by Mindshackle Scarabs but the locals are oblivious to the threat of the Xenos. Cato and his small band of Ultramarines nonetheless aid them in their fight against the Orks.[14c] After defeating the Orks, they slay those within the city enslaved to the Necrons before assaulting their Tomb complex and destroying it along with the C'tan Shard that dwelt within. Before leaving the world, Cato allowed his Remembrancer friend Vedaeh and several other mortals who wished to stay behind to do so.[14d]

Sicarius eventually returned to Imperial space and subsequently joined Lord Commander Guilliman's Indomitus Crusade. As the Crusade fought to save the worlds within the Dark Imperium, Guilliman took Sicarius under his guidance, as the stubborn Captain reminded the Lord Commander of Aeonid Thiel, and he spent a considerable amount of time trying to form Sicarius into something other than merely an exemplary warrior[11a]. When the Indomitus Crusade was finally ended by Guilliman, Sicarius was among the forces the Lord Commander took with him to aid the Realm of Ultramar, during the Plague Wars[11b].Suffering from survivor's guilt and a degree of mental trauma from his experiences in the Warp, Sicarius was nonetheless placed in command of Guilliman's Victrix Guard.[13] Brother-Captain Acheran succeeded him as Captain of the 2nd Company.[15]

In combat, Sicarius wears the Mantle of the Suzerain, a type of finely crafted Artificer armor which incorporates pieces from the the original armour worn by the renowned Captain Orar, an Ultramarine captain from the days of the Horus Heresy. The left pauldron is the original worn by Captain Orar, which includes the 2nd Company's heraldry colours, and the sigil which Sicarius has adopted as his own: incorporating an Iron Halo, the Ultramarines Chapter Icon, and a Gold Aquila which marks Sicarius as Grand Duke of Talassar.[Needs Citation]

Sicarius' weapons include a Plasma pistol and the Talassarian Tempest Blade, a power sword which he wields with expert proficiency.[Needs Citation]

During the attack of M'kar on Ultramar in 854999.M41, Marneus Calgar travels to Talassar to confront M'kar. According to Codex: Space Marines (5th Edition) (pg. 40), the 2nd Company, under Sicarius, accompanies Calgar to Talassar. In The Chapter's Due (Novel), by Graham McNeill, however, the 2nd Company is dispatched to Espandor, while Calgar is accompanied to Talassar by the 1st Company under Captain Severus Agemman. The 2nd Company does not reach Talassar until the end of the novel, to reinforce Calgar's position after concluding the campaign on Espandor.[Needs Citation]