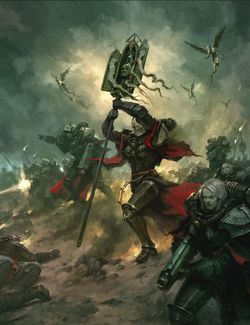 Celestians are the fighting elite of the Sisters of Battle.[2]

Celestians are the most skilled fighters within an Order of the Sisters of Battle, the fighting arm of the Adepta Sororitas. Gathered together in specialized squads, Celestians are ferocious and remorseless fighters. Religious fanatics, they are fervent adherents to the Imperial Creed and skilled practitioners of the martial arts of the Daughters of the Emperor of old. As a sign of their status they frequently wield special weapons in combat such as the Heavy Bolter, Stormbolter, Heavy Flamer, or Multi-Melta.[2]

Only those who prove themselves to be exceptionally proficient at war are deemed worthy of induction into the ranks of the Celestians. These elite warriors are deployed together where their superior experience can turn the tide of battle, often accompanying their Canoness as bodyguards. Amongst their number are those who once served as Dominions and Retributors, meaning that Celestian Squads are supported with the weapons and wargear necessary to face a wide variety of threats. Most Celestians were at one point a Sister Superior of lower rank, and as such they are each possessed of a formidable tactical acumen developed over many years of service. It is therefore not uncommon for a Celestian Squad to have no Superior, instead operating as a collective in which each member lends their experience to the others.[5] 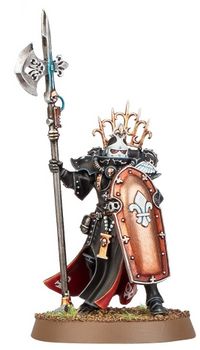 Sacresants are heavily armoured and highly skilled close combat Celestians, who traditionally act as bodyguards to the heads of their Order. They are also tasked with the holy duty of purging the impure and driving them from sites of sacred significance on the battlefield. Sacresants wield a variety of Power Halberds and maces along with shields and Bolt Pistols with which to smite the unclean, and bear large, ornate shields to ward off the blows of their enemies. Protected in both body and spirit, Celestian Sacresants are the wall against which waves of Heretics will break and they are able to overcome many times their own number in battle.[7][8]

A single Celestian in a Celestian Squad may be nominated as an Imagifier (Banner Bearer). These often carry a Simulacrum Imperialis, one of the Orders' ancient banners, into combat unarmed, to inspire their fellow sisters to fight harder against all odds.[3a]

Occasionally, Celestians may be formed up into bodyguard groups for senior members of the Order, such as Celestians Superior or even a Canoness. To be selected for such a role the Celestian must have previously distinguished herself in battle. The most noble warriors of the Order, Celestians approved for bodyguard duties may also be given additional responsibilities, such as becoming a banner-bearer, an Imagifier or a being assigned a particular duty in the Convent-Shrine.[1]

Ophelian Celestian Squads are formed from the best Celestians of the Orders Militants, hailing from the convents on Ophelia VII. If the need arises the entire squad can be requisitioned into serving in a Canoness' personal retinue.[3b]