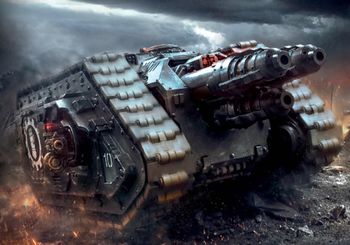 The Cerberus Heavy Tank Destroyer was an Adeptus Mechanicus and Legio Astartes heavy assault vehicle of the Great Crusade and Horus Heresy era.

An experimental design based upon the Spartan Assault Tank chassis, internal capacity was removed to make way for its Neutron Laser Projector and its required power sources. Constructed from reverse-engineered Dark Age of Technology-era wreckage recovered from Deep Hyades-VI by Explorators, controversy arose over the weapon's notorious instability. Nonetheless, the Cerberus and its Neutron Laser Projector proved effective enough to rival the larger and more common Turbo-laser Destructor's found on Titans and Shadowswords.[1] For anti-infantry defense, the Cerberus is equipped with sponson Heavy Bolters.[2]

Shortly before the outbreak of the Heresy, the first Cerberus vehicles were delivered to a number of Space Marine Legions.[1] Due to the complexities to maintain the vehicle and growing complaints of a corrupted Machine Spirit, very few remain in service as of M41.[3a]