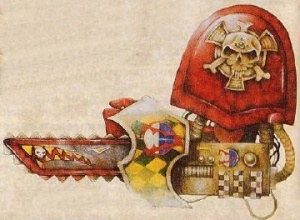 The Chainfist is a variant of the Power Fist, a weapon often used by the Adeptus Astartes.[1]

The chainfist is created when a power fist has a small chainsword attached to it, the size of a large bayonet. This is also covered by the energy field, and is used to carve through armored bulkheads and such. It can also be used quite effectively in close combat, punching through even Terminator armour.

Like the power fist, the chainfist is most often used by the elite of the Space Marines, often in conjunction with Terminator armour. Also, like its relative, the chainfist is slow and cumbersome, meaning the user will usually get hit first simply bringing it to bear, and again if he misses.