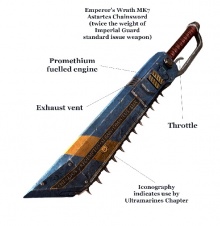 A Chainsword is a common form of chain weapon, essentially a sword with motorized teeth that run along the blade like those of a chainsaw. Most versions make use of monomolecular-edged or otherwise razor sharp teeth. The weapon makes an angry buzzing sound as the teeth spin around, intensifying into a high pitched scream as they grind into armour.

It is a popular weapon of Imperial Guard officers, and boarding and assault parties - such as Space Marine Assault Squads,[7] Chaos Space Marines - especially Raptors[8] - Eldar Striking Scorpions,[2] and Pirates.[4a]

Like many examples of human invention, the chainsword’s many variants seem to have their roots in the shrouded heresies of the Dark Age of Technology. Accordingly, it saw consistent use in the armoured fists of techno-barbarians during the Age of Strife, and among the Emperor’s own armies during his Thunder Warriors’ brutal conquest of Terra. But chainswords have been wielded by inhuman hands for aeons. Several xenos races have borne such blades into battle even in the ages where Mankind could only look up to the stars with spears in their filthy hands. Tech-Priest foundry masters have speculated, down the centuries, that it is simply a natural evolution of the sword’s design: from bronze to iron; from iron to steel; from steel to chain-teeth; and from chain-teeth to a weapon wreathed in an energy field - such as the Imperial power sword. But doubt remains. More than one Martian magos has devoted their life’s work to researching the primeval origins of chainweapons; mostly likely as an inspiration stolen from an alien race, in a war that may never be remembered. If this theorem ever bears fruit, it is distinctly possible that the galaxy’s first wielders of chainswords were jade-clad warriors of the ancient Eldar.[19]

The teeth of Imperial Chainswords are made of an adamantium-carbon alloy.[19]

The Eldar Chainswords are made of mono-molecular 'wymfrang's[19]