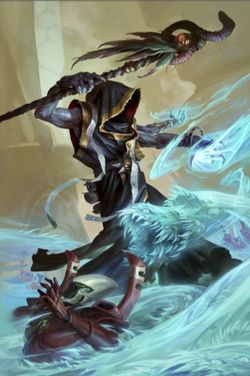 The Changeling is an infamous Horror of Tzeentch

The Changeling has the ability to assume the shape of any creature to use for trickery, to sow mistrust and confusion, and while not in battle to play practical jokes on the unwary.[1] The Changeling has altered so many times that even he has forgotten his original appearance. Only the God Tzeentch remembers it, and keeps it secret as a means of controlling the Changeling. The Changeling's schemes are not limited to the mortal realm, and he has been known to play tricks on even Gods of Chaos themselves, such as cutting Slaanesh's hair as the Dark Prince slept or putting Nurglings on Khorne's throne, creating a mess the next time the Blood God sat down.[3]

Roaming the galaxy and Warp alike in search of committing both practical jokes and devastating mayhem, the Changeling has appeared on the battlefield as a mirror-image of a hero, his comrades unable to tell the difference between the two until it was too late. It was the Changeling who in the image of Lord Solar Macharius ordered the retreat on Goranna just as the real Warmaster was about to direct his forces to the front line. As a Grot, the Changeling sabotoged Warboss Gitsmasha's favorite Shoota, blowing the Warlord and his retinue to smithereens as soon as it was fired. On one occasion, the Changeling even took the shape of a Keeper of Secrets and answered the summoning of a traitorous Imperial Governor whose palace was besieged by Dark Angels. There, the Changeling traded the souls of the desperate man's daughters for a "powerful artifact" to turn the tide of the siege, but turned out to be a stolen Ravenwing teleporation beacon.[3]

The Changeling was dispatched by Tzeentch to extend the "gift" of annihilation to Ahriman once the Thousand Sons arch-sorcerer completed his Second Rubric.[4a] In order to approach Ahriman, the Changeling killed and took the identity of a number of victims, but its disguise did not fool Ignis's automaton Credence, which attacked the daemon but was quickly defeated.[4b] When the Changeling reached its intended target, however, Tzeentch stopped its minion, revealing that new schemes had been planned for Ahriman. The trickster contented itself by briefly revealing its true face to the sorcerer before erasing all memory of the encounter.[4c]

The Changeling proved instrumental in orchestrating the Siege of the Fenris System in the late 41st Millennium. Disguising itself first as a Dark Angels Scout and later Sammael, the Changeling convinced Azrael that the Space Wolves had become mutated and were responsible for attacks on Dark Angels targets across the Galaxy.[5]

The Changeling wields the Trickster's Staff, which can mimic the weapons of his enemies.[6]