Chaos is a part of the psychic energy that composes Warp space. More generally, "Chaos" refers to anything related to Chaos, including its influence, the Gods of Chaos, their followers, and the Warp. Chaos is almost synonymous with the Warp - the two concepts are inseparable: Chaos is the limitless ocean of spiritual and emotional energy that defines the Warp. It is a great and raw force of change and power, and is both physically and spiritually corrupting. The most gifted mortals, psykers, can utilise this energy, thus making them capable of abilities which transcend the laws of the material universe. However, the malevolent power of Chaos can gradually corrupt a psyker, tainting their mind and body.[Needs Citation]

The iconic symbol of Chaos is the eight-pointed star, representing the infinite possibilities of Chaos.[Needs Citation] 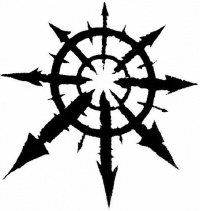 The eight-pointed star of Chaos[19]

The Realm of Chaos

The Realm of Chaos was formed as the emotions of mortals (be they anguish, desire, hatred, or pride) pooled together in the psychic mirror-reality of the material universe known as The Warp. Such was the power of these emotions that they eventually formed creatures which, over time, gained sentience, resulting in the birth and rise of the Gods of Chaos. As the races of the material universe grew, so too did their hopes, dreams, rage, wars, loves, and hatreds. All of these raw emotions served to fuel the growth and power of the Chaos Gods. Eventually, the gods reached back, into the dreams and desires of mortals, and since that time they have been working to influence the physical realm and its myriad races.[7]

Chaos and its realm exists far outside of imagination; an impossible abstraction made real only by metaphor and the roiling emotions of the minds of mortals. It is constantly reborn, eternally shifting. Within this realm titanic hosts made purely of energy and emotion clash as the Gods of Chaos wage their endless Great Game. The Chaos Gods and their dominions are one, for both are formed of the same Warp Energy. As the Gods gain power, their realms expand. However the Gods are not alone, for they have countless servants made of their own essence known as Daemons. The beings of the Warp have no true physical forms and even Daemons are simply taking a skin or bubble of appearance that is a projection of their God. The Realm of Chaos is a fantastical landscape devoid of consistency and unbound by the laws of time and space, a random, unstructured panorama of pure energy and unfocused consciousness. It is from this nature that it is dubbed Chaos, for it is Chaotic in the truest sense.[7]

The Realm of Chaos and the Material Universe can overlap, often with devastating consequences for mortals. Warp Storms and Warp Rifts are such examples of a breach between these two realities.[14]

At the dawn of time, the Old Ones took some of the primitive races, guiding their development to suit a specific purpose. The Warp at this time was not the hostile place it was in later ages. During their war against the Necrons, the Old Ones created races to battle the threat they posed, creating races with stronger ties to the Warp, giving them psychic power to turn the tide against the Necrons. One of these races was the Eldar.[13]

Just before the birth of the Emperor of Mankind, the three Gods of Chaos; Khorne, Tzeentch, and Nurgle had already begun to take form in the Warp, although it would take until the end of Terra's Middle Ages for them to fully awaken.[1] Slaanesh had not awoken until around M29, marking the end of the Eldar Empire and the end of the Age of Strife, as well as the beginning of the Great Crusade and the rise of the Imperium.[12a]

The rise of Chaos and the first three Chaos Gods, as described, seems to correspond to the development to humanity, implying that Mankind, of all the sentient species, were primarily responsible for the disharmonising of the Warp and the birth of the first three Chaos Gods. Although, without question, all sentient species played a role in the birth of the Chaos Gods, it seems that mankind has an especially close relationship with Chaos, or that mankind's nature is particularly aggressive and unstable.[1]

The Forces of Chaos 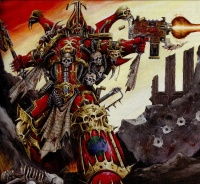 Chaos Cultists of the Pilgrims of Hayte[22] 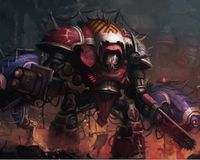 The forces of Chaos are those who have pledged themselves to the Gods of Chaos. They are most commonly organized into several types:[15]

Daemons are entities of the Warp, horrific creatures brought to the battlefield by the guile of sorcerers. They are often armed simply with claws that rip and tear the enemy to shreds; some use psychic-based powers. The lesser daemons tend to be very poorly armoured and fall in great numbers to rapid-fire weaponry.[15]

The Lost and the Damned are a broad range of renegades and mutants, including degenerate humans, beastmen, cultists, rogue psykers, mutants of the Daemon Worlds, and Traitor Guardsmen. They are also often poorly armoured but come in vast numbers.[16]

The Chaos Space Marines are formed of the Adeptus Astartes who fell under the sway of Warmaster Horus and rebelled against the Emperor in an attempt to bring the material galaxy under the control of Chaos. A full nine legions left the side of the Emperor and joined Chaos, some choosing specific deities to worship while others went to Chaos Undivided. In the millennia since, other formations of Adeptus Astartes have also fallen to Chaos, from single squads to entire chapters.[15]

The Traitor Titan Legions consist of legions of the Collegia Titanica who have fallen to Chaos, many turning their backs on the Imperium during the Horus Heresy. Utilizing Titan war machines corrupted by the powers of Chaos, they are among the most reviled enemies of the Adeptus Mechanicus.[3]

Chaos Knights consist of Imperial Knights and in many cases their entire Households that have fallen to the Ruinous Powers. They pilot Knight suits, which while smaller than a Titan are still powerful war machines in their own right.[9a]

The Gods of Chaos 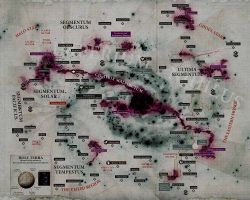 There are four great Powers of Chaos. Each one is given form and fed by the emotions manifested by sentient beings in the material universe.[17a]

The Chaos Powers and the emotions that gave rise to them:[17a]