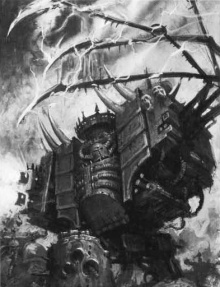 A Chaos Dreadnought is a Dreadnought in the service of the Chaos Space Marines. Under the influence of Chaos, many Chaos Dreadnoughts have degenerated into insane monsters, known as Helbrutes.[2b] However exemplars of ancient Dreadnought patterns still exist, having become dark reflections of their imperial counterparts.[2c][2e]

Over the course of the Horus Heresy, the Legiones Astartes that had sided with Horus were gradually corrupted by the influence of Chaos. The war saw the emergence of unique Dreadnought variants among the Traitor Legions that reflected this growing change. These included the Mhara Gal Tainted Dreadnought of the Word Bearers[3] and the "berserker" Dreadnought of the World Eaters.[4] The Mhara Ghal was the first to be utterly tainted by Chaos, its occupant a possessed of the Gal Vorbak who had fused with the chassis.[3]

After the Heresy, knowledge behind the creation of the old Dreadnought patterns declined among the traitors.[2a] With the exception of the prized Contemptor chassis, little effort was made to maintain and replicate the Legion's more sophisticated wargear.[2e] Without the technology to protect them from the ravages of time, such as stasis tombs, and exposed to the malignance that had spread among the legionnaires, internment within a Dreadnought's sarcophagus became a living hell.[2a] Under the sway of Chaos, many fell prey to insanity and mutation. This fate is also shared by the Dreadnoughts of Renegade Chapters that have succumbed to Chaos in the years after the Heresy, such as the Crimson Slaughter.[2b]

For Chaos Space Marines, incarceration within a Dreadnought is seen as a fate worse than death.[2a] Unsurprisingly, it is used as a means of punishment by their Lords.[1b] 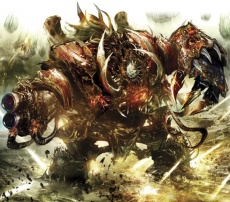 They are created when the body of the warrior within a Dreadnought melds with the chassis until the whole machine appears to be made of daemonic flesh.[2b]

Unlike other Chaos Dreadnought variants, new armours are being built, incorporating pseudo-parasitic sarcophagi that cause the traumatizing transformation into a Helbrute. As a result of this process, Helbrutes are completely insane.[1a][1b] 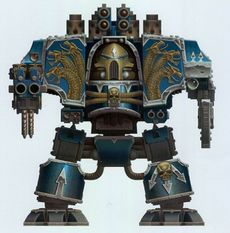 Ferrum Infernus is a designation for Chaos Dreadnoughts of the Castra Ferrum pattern that have not mutated into Helbrutes.[2c]

Since the knowledge of creating new Dreadnoughts has been lost, the Ferrum Infernus chassis is a relic, hailing from the days of the Horus Heresy.[2c]

The warriors interred within the chassis vary strongly in demeanour. Some have become highly experienced veterans, while others have descended into madness.[2c] 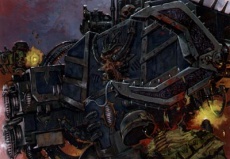 The Sonic Dreadnought is a Ferrum Infernus variant deployed by the Emperor's Children and other warbands dedicated to Slaanesh.[2d]

Only Noise Marines who are willing to give up all physical sensation upon interment can be trusted to pilot a Sonic Dreadnought without growing unstable.[2d] 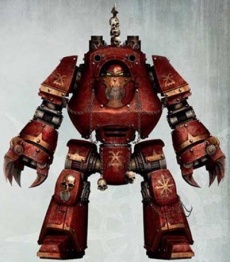 The Chaos Contemptor Dreadnought is the rarest and most powerful Chaos Dreadnought.[2e]

It is the only variant to still be held in reverence by Chaos Space Marines and occupancy is usually reserved for powerful Chaos Lords.[2e]

Due to efforts to keep these war machines functional, those interred do not risk falling into madness like the occupants of lesser patterns. However, only few well-versed machine-adepts and Warpsmiths understand the complex technology behind the Contemptor.[2e] 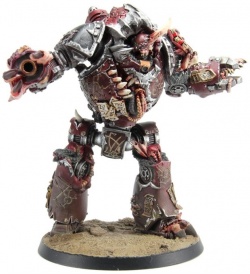 The Mhara Gal Dreadnought is a twisted possessed-variant of the Chaos Dreadnought first used by the Word Bearers during the Horus Heresy. 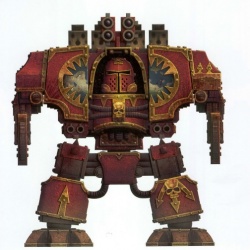 A Berserker Dreadnought is a Chaos Dreadnought variant that is utilized by the followers of Khorne. 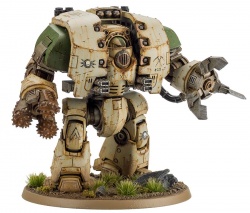