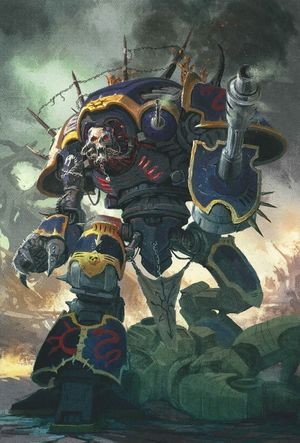 Chaos Knights, also known as Daemon Knights, Renegade Knights or Questor Traitoris, are Knights and their Households that have been corrupted by the powers of Chaos.[1]

Since the Horus Heresy, thousands of individual Knights and even entire Knight Houses have been corrupted by Chaos and betrayed the Imperium. The first Renegade Knights appeared during the Horus Heresy, when many of the Knightly households sided with Warmaster Horus.[3a] However since the Heresy, many more Knights have betrayed the Imperium. Some were corrupted after their worlds were swallowed by Warp Storms while others were slowly driven mad by the endless carnage they witnessed and inflicted on countless campaigns.[3b] 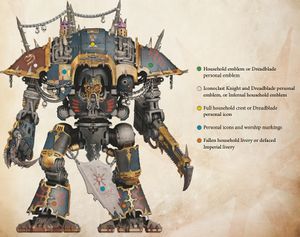 Each Chaos Knight is twisted reflections of the Imperial Knights. The Knight suits were first created using Standard Template Constructs during the Dark Age of Technology, and many have survived through the innumerable wars that have characterized the long millennia since. Over years or even centuries, Chaos energies seep into the war engine, torturing its Machine Spirit and mutating its mechanical form. Where once the suit and its pilot were a gleaming beacon, the Chaos Knight and its Fallen Noble comprise a symbiotic beast of wrath and hate. A Noble is enabled to pilot their war machine by being wired into an arcane contraption that is implanted into their Knight’s cockpit the Throne Mechanicum in the larger Knights, or a Helm Mechanicum in the smaller classes Within each Throne Mechanicum are the spectral echoes of its previous pilots. Thus only the strongest of the Fallen Pilots are able to commune with a Throne Mechanicum and not go mad in the process. Even those who survived become tortured beings, their suffering reflected in their Throne Mechanicum for centuries to come. Nobles who are wired into a Helm Mechanicum are similarly twisted by Chaos energies that have been absorbed by their war engine. The Helms also yoke these pilots mind and soul to the will of their Knightly overlords.[3a] Other less fortunate pilots have fused entirely to their Throne Mechanicum while others have simply died and their suits are now controlled wholly by Daemons.[3b]

Fallen Nobles embark on campaigns for many reasons. Some do so to conquer territory in the name of the Ruinous Powers. Others have sworn fealty to the Dark Mechanicum, Chaos Space Marines, or powerful daemonic entities, and answer the dread summons of war whenever they are called upon. Others still are driven by insanity, launching quests to unravel the very fabric of existence and transform the galaxy into a twisted hellscape. Chaos Knights are either sole traitors classified by the Ordo Hereticus as Dreadblades, or part of a greater Household that has turned its back on the Imperium. The latter are considered a far greater threat, often allying with the Traitor Titan Legions and Dark Mechanicum. Others have more varied fealty such as those to Chaos Space Marines or the Chaos Gods themselves.[3a]

As entire Knight Houses became corrupted, so too were the worlds in which they held sway. The Dark Powers took root on these planets, and depraved cultures and cults became rampant. These Fallen Knight Worlds exist throughout the Galaxy, and now consist of teeming Cultists and Fallen Nobles competing to raise the greatest fanes to the Ruinous Powers. The Fallen Nobles of a Chaos Knight hold supreme power, with their Armiger Pattern Knights simply known as War Dogs.[3b] 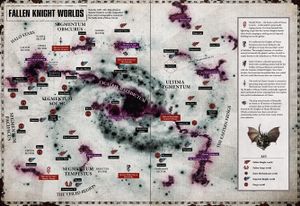