Chaos Psychic Powers concentrate on offensive effects. Chaos-aligned psykers, including the Chaos Space Marine Sorcerers, are among the most powerful of all psykers, as they may use their powers to their fullest extent, without fear of daemonic possession. However, if the psyker is not in his patron god's favour, then he is as likely to be destroyed by daemonic possession as any other psyker in the galaxy. 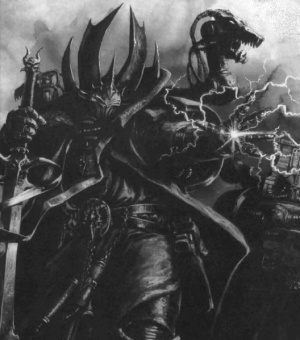 Along with the non-aligned Chaos powers, there is a unique power associated with each god, usable only by their worshipers.[2a]

Because Khorne detests sorcery and all its users, no psychic powers are per se granted to its followers.[1b] However, the Blessing of the Blood God is a unique power granted to Khorne's greatest champion, Kharn the Betrayer, which renders him immune from all psychic attacks[2b].

The Rubric of Ahriman was a spell cast by Ahriman on the Thousand Sons legion after escaping into the Eye of Terror. He was so appalled at the mutations he saw among his brothers that he vowed to stop them. However, he only succeeded in destroying the bodies of his brothers and sealing them within their own armour. Only the intervention of Magnus the Red was enough to stop the spell destroying the entire legion.[1f]

The Storm of change is an incredibly powerful psychic attack performed by a group of Chaos Sorcerers from a Thousand Sons Warcoven. While devastating to the enemy, it often results in the complete draining of psychic energy from the casting sorcerer.

Barbed chains erupt from the ground which immobilize enemy infantry and cause minor damage. However, it is not effective against vehicles or structures.[5]

Chaos taint is cast over an area of the battlefield, causing all units in the area of effect to take continual damage.[5]