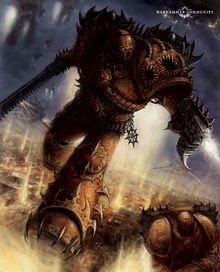 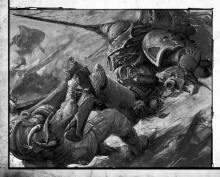 Raptors are the dedicated jump infantry of the Chaos Space Marines.[1]

Raptors consider themselves as elite shock troops. Although seen as very egotistical by other Chaos forces, their use of deep strikes at the most vulnerable point in an enemy line has given them a predilection for preying on the weak, making them vicious hunters. Much like Terminator Armor, the Jump Packs used by Raptors are considered prized relics and badges of honour. Often the armour of a Raptor is modified with amplifiers and vox casters to emit terrifying sounds used to disorient their enemies, making them easier prey. They always wear their stylised jump packs which are identifiable by their arched intakes and thrusters.[1]

Raptors are sometimes armed with flamers or meltaguns to aid in different situations. Whatever they are armed with, Raptors descend upon positions and deal death and destruction wherever they land. Due to their egotistical and self-indulgent reputation, Raptors often stir up rivalry when amongst other Chaos forces, while their disinterest in interacting with other members of the warband gives them a still greater air of arrogance. Champions of Chaos still see their merit in combat and some even stoke up rivalry to get rid of the weakest of their force, leaving a more hardened core.[1]

The Night Lords, due to their specialty on terror tactics and shock assaults, are known to employ large numbers of Raptors.[4]

Raptor warbands frequently operate in Cults, usually consisting of the original Raptors that fought for Horus but who have since become twisted into something more monstrous by the Gods of Chaos. Much like Khorne Berzerkers and Plague Marines, these Raptor Cults worship one of the Gods of Chaos, but which god exactly remains unclear. It is speculated that rather than Khorne, Nurgle, Slaanesh, or Tzeentch, Raptor Cults may worship one of the minor Gods of Chaos. But whomever they worship, as time has passed Raptors have become even more corrupted, mutated by the strange forced of Chaos such that they no longer bear a resemblance to their Imperial counterparts.[2]