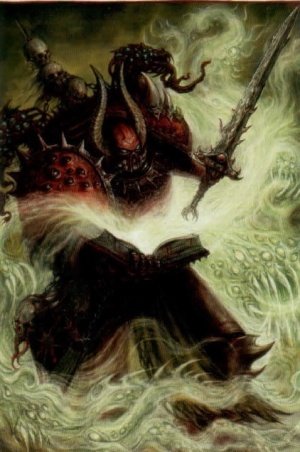 Chaos Sorcerers are Space Marine Psykers who choose to follow Chaos. Their loyalist counterparts are Librarians.

The first Chaos Sorcerers emerged from the ranks of the Thousand Sons before and during the Horus Heresy. Some of these Sorcerers were exiled after the Rubric of Ahriman was cast and they now sell their services in exchange for sacrifices or the chance to hunt down arcane lore. Only the World Eaters destroyed their Sorcerers, Khorne having no interest in sorcery. If a Librarian overreaches himself and draws on too much psychic energy he may be granted visions of immortality and whispered promises of power.[Needs Citation]

Most Sorcerers are granted gifts by their god, which further enhance their psychic powers. They are also often selfish madmen, believing themselves superior to all others and on a mighty quest for power and knowledge to increase their mental fortitude and develop new ways of using their powers. Often the visions given to Sorcerers are unattainable, subsequently driving them to extremes in their desire to achieve these goals.[Needs Citation]

In addition to the Chaos Psychic Powers they can call upon, certain powerful sorcerers are able to wield Force Weapons.[1] 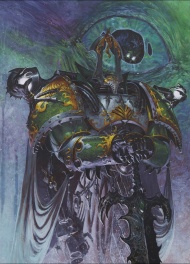 A Sorcerer of Tzeentch

Sorcerers often take part in Daemonic Pacts to increase their powers through the use of Daemonic energy. This pact bargains some form of service or payment in return for a part of the Daemon's power. The Sorcerer can use this power to unleash staggering psychic powers, in the same way as Daemons use it to maintain their grip on reality. The greatest Sorcerers have dozens of daemonic pacts to increase their powers to unimaginable ends. While this can be useful and attractive, eventually a price must be paid by the Sorcerer.[1]

In 3rd Edition, Chaos Sorcerers were Chaos Lieutenants with psychic powers, second in command to Chaos Lords who could also have psychic powers and carried unique staves.[2] In 4th Edition however, Chaos Sorcerers are moved much closer to the role of Librarians and made into a dedicated unit rather than an upgrade for pre-existing units.[1]