The card deck contains 35 cards (plus a cover card) and was sold in a cardboard box. A leaflet with the rules was included in the box.[1] 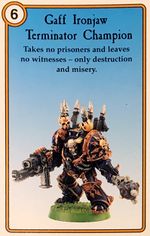 Each card features a full-colour photo of a Citadel Miniature with the following info:[1]

Each player needs his own deck of combat cards which he places face down in front of himself. He then draws a hand of five cards which he does not show to the other players. Each round the lead player places a "warband" consisting of one or more cards in front of himself. This is in turn repeated by each player until every player has a "warband" lying on the table.[1]

A "warband" must consist of at least one card with a coloured value number (red, green, blue, orange, yellow, light blue, light green, purple or pink) and may include any number of cards of the same colour. It is not allowed to include cards with other colours. A "warband" may also include a white so-called "bonus card" although there might never be more white than coloured cards in a "warband". If a player only has "bonus cards" on his hand he must discard one which scores zero. The value of a warband is calculated by adding up the values of all the included cards. The highest scoring warband wins the round. If two warbands have the same point value the warband containing more cards wins. Should there be multiple warbands with the same point value and number of cards the respective players play another round, i.e. they draw new cards until their hand is back up to five cards and play another round from the same lead. The winner of this new round also wins the previous round and normal gameplay is resumed. The winning player leads in the following round.[1]

Cards that were not played are retained and each player draws new cards from his stack until he again has a hand of five cards.[1]

The game ends when one player is not able to refill his hand anymore because his stack of cards is exhausted and the overall winner is the player who won the most rounds.[1]

Civil War variant (only for 2 players)

For this game variant one deck of Combat Cards is dealt out between two players with the spare card being discarded face down. Otherwise the game is played as described above.[1]