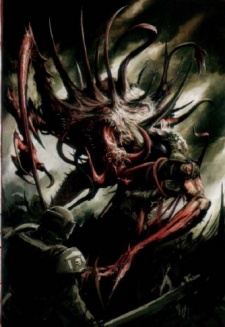 Chaos Spawn are creatures which have become so mutated through their servitude to Chaos they have devolved into twisted and insane abominations.

Those seeking immortality and power through Daemonhood face the constant possibility of being reduced to Chaos Spawn, either by accumulating too many mutations or being cast aside by their Chaos patrons as unworthy. Chaos warband members who descend into Spawndom will either be abandoned by their former comrades or kept as mascots or as beasts to be herded into battle.[1]

Chaos Spawns may vary in shapes and sizes, from dog or man-sized creatures to huge monstrosities.[3]