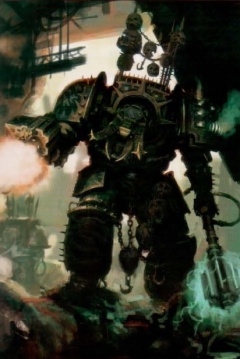 The weapons combinations available to Chaos Terminators combined with their fearsome armour make them terrifying opponents to fight against. While not the swiftest of troops, they can use a Land Raider to travel across the battlefield to positions which their weaponry will make the best impact. Otherwise they can teleport through the use of arcane technology or sorcerous powers. Often they appear ready to strike, giving their foes little chance to react.[1a]

Chaos Terminators stand in high respect to the Chaos gods. Many of them are Aspiring Champions although often the only way to acquire terminator armour is to kill the previous owner. They usually form the bodyguard of the highest ranking leader or Champion and are often seen enforcing the will of the Champion. Often they abuse their position, intimidating other members of the warband, while many simply see them as a vision to strive towards, one day assuming the mantle of Terminator themselves.[1a]

The standard Chaos Terminator armament is a Combi-Bolter and a Power Weapon which can be upgraded to either a Power Fist or Chainfist. In addition, Terminators may also take a Reaper Autocannon or Heavy Flamer in place of their Combi-Bolter. The Combi-bolter itself can be configured to function as either a Combi-Meltagun, Combi-Plasma Gun or Combi-Flamer.[1b]

They can also be equipped with a pair of Lightning Claws for close combat.[1b]

Scarab Occult Terminators were once the finest psykers in the Thousand Sons, bodyguards to Magnus the Red himself. Like their brothers, they where affected by the Rubric of Ahriman spell and turned into dust. Now they stride into battle at side of their sorcerous masters. Clad in ornate armour, they are armed with Khopesh blades and Inferno Combi-Bolters. The unit has also acces to Heavy Warpflamers, Soulreaper Cannons and Hellfyre Missile Racks. The Sorcerer leading his unit also wields a Force staff.[3]

Blightlord Terminators serve as the disease-ridden elite of the Death Guard. .

During the Horus Heresy the Traitor Legions fielded units clad in Cataphractii armour just like their loyal brothers. They where armed with Combi-Bolters, power fists and grenade harness, but also had access to Chainfists, Lightning claws, heavy flamer and power swords.[4]