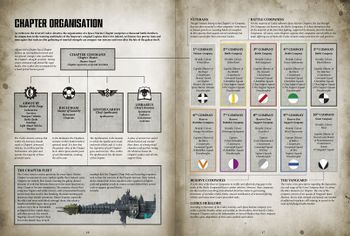 A Chapter is a self-contained Space Marine army usually made up of a thousand or so Space Marines, as well as a large number of administrative and functionary personnel.

The Adeptus Astartes is divided into roughly a thousand Chapters. Each constituent Chapter is autonomous and constitutes a complete army, with its own leadership, support and administrative staff, reliant only on its own Chapter members. Each chapter has its own traditions, specialties, its own cult, beliefs and practices.

Chapters were originally an organizational unit used by the Thunder Warriors. During the Great Crusade, the Space Marines were organized into Legions, further divided into Companies. Chapters were adopted by some of the Legions as an intermediate level of organization.[2b] The Ultramarines Legion, led by Roboute Guilliman, became the largest of all the Legions, thanks to Guilliman's tactical mastery and a steady flow of new recruits from Ultramar.[1] At the time of the Horus Heresy, the Ultramarines Legion was divided into twenty-five Chapters, each composed of ten Companies, each company composed of roughly one thousand Marines.[2a]

Following the Heresy, Guilliman, as Lord Commander of the Imperium, ordered the Space Marine Legions divided and re-organized into smaller Chapters, to ensure that no future rebel such as Horus could gain control of such a large military unit as a Legion again.[1] Newly formed Chapters created in this new system which originated from the remaining loyalist Legions became known as Successor Chapters.[3a]

The creation of a new Chapter is known as a Founding, and it does not happen overnight. Each Chapter is created from the gene-seed of an existing donor Chapter. After the Scouring, Roboute Guilliman tasked the Adeptus Terra with setting up and maintaining a genetic bank to procure and store tithes of gene-seed, which would in turn provide the gene-seed for all future Chapters. To prevent cross-contamination, the genetic stock of each legion was isolated while those of Traitor Legions were put into stasis lock. By taking direct control of these genetic tithes, the Adeptus Terra now could ultimately control the Space Marines as they had the power to destroy or create Space Marine armies at will.[4]

When creating a chapter, the zygote is implanted in a human test-slave who spends his entire life in a static experimental capsule, immobile and serving as nothing but a medium which from two progenoids will develop. When the progenoids are developed, they are extracted from original test-slave and then implanted into another two test-slaves, producing four progenoids, and so on. It takes 55 years of reproduction to create a healthy set of 1,000 organs. These must be sanctioned officially by the Master of the Adeptus Mechanicus and then by the High Lords of Terra, speaking for the Emperor, who alone can give permission for the creation of a new Chapter.[9]

A so-called Codex Chapter, meaning a Chapter which closely follows the doctrines of the Codex Astartes, is made up of ten companies, each consisting of one hundred Marines and commanded by an officer with the rank of Captain. Below the Captain are two Lieutenants which each command a Demi-Company.[5] Generally, the First Company is made up of the Chapter's most experienced Veterans, while the Second through Ninth consist of more ordinary warriors. Some individual companies are specialised assault or support companies, possessing larger proportions of Assault, Devastator, Hellblaster, Eradicator[8], Aggressor, Reiver, and Inceptor squads. The tenth company is a Scout force, made up of neophyte Space Marines not yet proven in battle. Typically, a standing force of 100 Vanguard Space Marines are attached to the 10th Company.[6] The Chapter is further bolstered and supported by a Librarium, Armoury, Apothecarion, Chaplaincy, and Fleet.[Needs Citation]

Each Chapter is led by a Chapter Master. Unlike the Imperial Guard, the Adeptus Astartes has no leadership above the Masters of the individual Chapters. Also unlike many other Imperial military forces, the Astartes are not represented on the High Lords of Terra.[3b]

Besides the Space Marine fighting brethren, there are many non-combat personnel, fully part of the Chapter but generally not involved directly in combat. These include the chapter's hereditary slaves, Astropaths, Navigators, etc.[Needs Citation]