The Charnovokh Dynasty are a Dynasty of the Necrons on the Eastern Fringe.Their worlds ravaged by Tyranid hive fleets, the dynasty is fractured and is now only a pale mirror of its former glories.[1a]

Much of the territory it once ruled lies far to the galactic southeast, beyond the Eastern Fringe of Ultima Segmentum.[2a] As a result, many of its dormant Tomb Worlds were devoured by the Tyranid Hive Fleet Behemoth while countless others have been ravaged in counterattacks against the Tyranids by the Imperium. As a result, the remaining systems of the Charnovokh Dynasty are many, but small and scattered.[1a] When the Silent King arrived, the Charnovokh proved willing allies.[4] 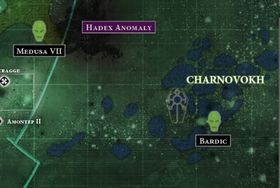 The livery of the Charnovokh dynasty honours the coreworlds lost to these attacks, with all of their warriors bearing the colours of Night Unending to some degree. The more prestigious the Necron's rank, the more of this deep blue adorns their carapace, with phaeron Thoekh's entire frame clad in midnight blue.[2b] The Charnovokh symbol represents the original three coreworlds and surrounding outer planets of the dynasty, although only a small fraction of these worlds now remain.[2b]