Cherubael is a Daemon Prince. He was bound into a daemonhost by Inquisitor Quixos and forced to join his retinue. Following Quixos' execution, he was rebound and pressed into service by Insquistor Eisenhorn.[4]

While Cherubael has no known patron god, his exploits are known throughout the Imperium. In the Library Sanctus on Holy Terra, the archive "Liber Malum" chronicles the history of this daemon. Cherubael's exploits include [4]:

When Inquisitor Quixos freed the Clanars from Cherubael's domination, he managed to bind the creature into the body of one of his warriors. At this point in his career, he was already well on his path of radicalism, as the daemon sword Kharnagar had been pivotal to Cherubael's defeat.[Needs Citation]

Years later, one of Cherubael's cults sprung up on Cadia. Calling itself the "Sons of Bael," the cult was a front for the study of the Pylons on the planet. Using stolen security codes from the local Cadian Inquistor Neve, the cultists had been continuing their covert studies for many years. They had arisen some years before 338.M41, when Quixos had begun investigating the properties of Blackstone, in the hope he could close the Eye of Terror.[Needs Citation]

Cherubael had first encountered Inquisitor Eisenhorn while assisting Quixos's accomplice, Inquisitor Konrad Molitor, to secure the Necroteuch. He engineered his freedom through the manipulation of events surrounding Inquisitor Eisenhorn, making sure that Eisenhorn was in the right place at the right time, with the right weapon, to banish Cherubael back to the Warp and release him from the bonds Quixos had used to enslave him. However, Eisenhorn later ensnared the daemon in a daemonhost of his own. Later on, a desperate Eisenhorn called upon Cherubael to stop a rampaging Chaos Titan. The daemon destroyed it, but was bound within the body of a young inquisitor. While Eisenhorn was reluctant to walk the path of the Radical, he used a more controlled form of the daemon, bound by the arcane literature of the Malus Codicium, to defeat Pontius Glaw.[3b] Cherubael was still with Eisenhorn years later, during his brief meeting with his protege, Gideon Ravenor, in a temple of the Divine Fratery.[1]

Still in the service of Eisenhorn, who has utterly submitted the Daemon thanks to his use of Enuncia, Cherubael expressed his boredom and frequently sought to entertain himself by conversing with the clone of Alizebeth Bequin in the Inquisitor's service.[5a] Later during the attempts to enter the City of Dust, the domain of the King in Yellow, Eisenhorn dispatched Cherubael to recover Bequin but was stopped by Comus. The two engaged in a fierce battle.[5b] 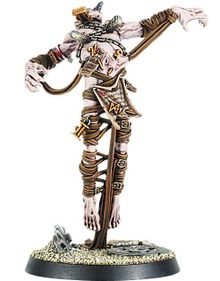