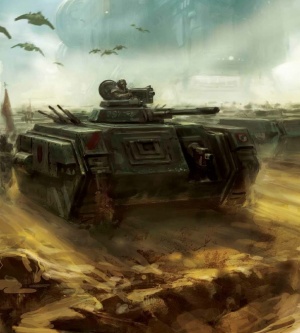 A Chimera moving across the battlefield[2a]

The Chimera is the primary armoured infantry transport for the Imperial Guard. Highly durable and practical it has been used as a chassis for many other vehicles and has been in service for many thousands of years, typifying the fast moving warfare favoured by the Imperial Guard.[1][2a]

The primary duty of the Chimera is to accompany tanks into battle and provide protection for the Guardsmen within so that they may support the tanks. Standard doctrine states that after the Chimera reaches its objective it lays down covering fire with its heavy weapons while the squad within disembarks and advances. The Chimera then falls back to a firing position from which it can still support the infantry and await orders to race forward and collect the squad again to reposition them.[3a] When operating as part of an armoured advanced the Chimera often operate ahead of or on the flanks, as well as side-by-side with the Leman Russ Battle Tanks, providing additional weight to the tanks' massed firepower.[1] Besides the added mobility, firepower and protection, Chimeras allow infantry to take extra gear, including med-kits, vox equipment and more ammunition, making them far more efficient than their foot-slogging infantry.[3a] The Chimera is less useful though when forced to fight in urban settings or as part of static defenses.[1]

The Chimera can fulfill additional roles and many basic variants of the standard vehicle exist. With their communication equipment and scanners Chimeras are suitable command vehicles, while those with Dozer Blades can clear terrain for heavier vehicles to move through or provide nighttime illumination from their Searchlights.[2a] While generally armed with a Multi-laser and Heavy Bolter, those fitted with a Heavy Flamer are popular when fighting in dense terrain such as jungles and forests; usually one in three Chimeras will be outfitted as a flame tank if other infantry close support vehicles, such as Demolishers, Thunderers and Hellhounds, are unavailable. Those equipped with Autocannons also fulfill the light anti-vehicle role, while Gryphonne IV makes a unique Chimera variant mounting twin-linked Heavy Bolters, particularly effective against dense infantry formations such as Ork mobs and Tyranid swarms.[3a] Chimeras have also been used by the Inquisition to transport Inquisitors and their stormtroopers,[4] Purity Seals affixed to the hulls to protect the vehicles' machine spirit and its passengers from daemonic possession.[1]

The Chimera is a rugged and dependable machine able to operate in the most hostile environments,[2a] thanks to onboard oxygen tanks.[3a] It is also amphibious, able to traverse dense swamps and marshes, even rivers, in order to outflank the enemy.[2a] A driver and gunner sit forward in the hull, operating the hull-mounted Heavy Bolter, while the commander sits in the turret and operates the turret-mounted Multi-laser.[3a] The hull-mounted bolter can be switched out for a Heavy Flamer, while the turret can instead be fitted with a Heavy Flamer, Heavy Bolter,[2b] Autocannon or twin-linked Heavy Bolters.[3a] In the rear of the vehicle is the troop compartment with room for twelve Guardsmen and their equipment with entry and exit provided by a back access ramp. The compartment also has mountings for six lasguns along either either flank of the vehicle, allowing the infantry within to fight from the Chimera's protective bulk, while the top hatch allows one of the embarked troopers to fire a heavy weapon, though this makes the vehicle more vulnerable to enemy fire.[2a][3a] In addition the Chimera comes standard with a Searchlight and Smoke Launchers, while other common modifications include Camo Netting, a Dozer Blade, Extra Armour, a Hunter-Killer Missile and/or a pintle-mounted Heavy Stubber/Storm Bolter.[2b]

A Chimera in the service of Inquisitorial Stormtroopers.[4]

Vehicles based upon the Chimera chassis: