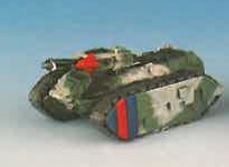 The Chimerro is the most basic modification of the Chimera, armed with an auto-loading hunter-killer missile and a multi-laser. It is used by the Astra Militarum and Skitarii.[1]

Chimerro assault vehicles mount a standard hunter-killer missile tube with an autoloader on the side of the standard multi-laser turret. This addition gives the Chimerro a powerful long-range weapon, while the multi-laser still allows it to support its disembarked infantry by mowing down enemy troops.[1]

The Chimerro maintains the full transport capacity of the Chimera and thus can be used to replace Chimeras on a one-for-one basis in Imperial forces. Chimerros can also be organised into Chimero Assault Squadrons, which are then attached to various infantry detachments.[1]

The variant has been tested and approved by veteran regiments of the Astra Militarum and Skitarii. [1]