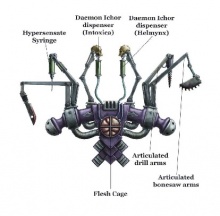 The Chirurgeon is a part-daemonic, part-technological device attached to the spine of Fabius Bile. It provides him with numerous spider-like arms which extend over his shoulders but also pumps black ichor through his body which is charged with the power of the warp and creates a protective ward around him. It has been said both that the Chirurgeon is Bile's life's work and that it works to keep Bile alive.[1]

Bile suspects that the Chirurgeon has developed a degree of sentience over his years within the Eye of Terror, and often has dreams of the device scurrying about and conducting its own activities while he slumbers. Bile also suspects at times the Chirurgeon is responsible for the many fits of pain he experiences.[2]

More recently, the Chirurgeon's level of sentience has expanded. It has become capable of moving on its own, skittering away from Bile and vanishing for days or weeks. Bile has discovered the device is now capable of producing "offspring".[3]