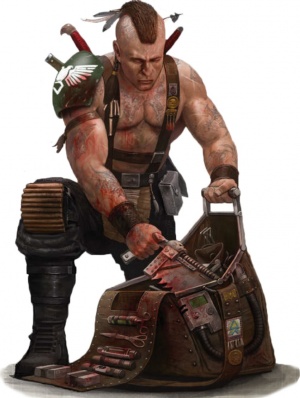 Chiurgeons (also spelled Chirurgeons) are medical and anatomical specialists of the Inquisition, Imperial Guard, Orders Hospitaller, and Officio Medicae. Often serving in the Retinue of Inquisitors, these servants specialize not only in the art of healing but also the art of repentance, interrogation, and the yielding of information through torture. Knowing the intricacies of human anatomy, they know the exact amount of punishment they can inflict on their subjects before it expires. They can inflict the maximum amount of pain for the least amount of effort, and then nurse their subject's shattered body back to health in order to begin the process again.[1]

Field Chiurgeons are the field medics used by the Imperial Guard. field chirurgeon is first and foremost a line trooper, but one who has received additional training in order to render medical aid to his comrades when needed. In particular, the field chirurgeon’s expertise lies in keeping his fellow soldiers standing during a given battle so that the entire squad can survive.[2]

Highly experienced Imperial Guard regiments, those that have been operational for many years and whose members are considered veterans, are likely to field a great number of field chirurgeons in their ranks.[2]

Catachan Jungle Fighter regiments are blessed with a great number of skilled Field Chirurgeons. Due to the hostile nature of their homeworld, many were already skilled in combat medicine before being recruited, and well able to perform their duties on the battlefield.[3]