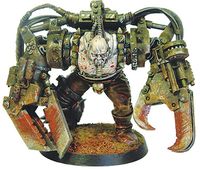 Chrono-gladiators are cyborgs, sometimes made as a criminal punishment by the Adeptus Mechanicus[2], whose lifespan is determined by a pre-set self-destruct program; the only way they can extend this is by killing. Each battle they win moves the timer a fraction on the self destruct deadline, driving them to kill in order to keep living.[1] In battle they are ferocious opponents who fight for the thrill of combat and the promise of an extended life.[2]

Chrono-gladiators are fitted with numerous bionic weapons and attachments, with almost no equipment other than that necessary for killing (though some are known to have been equipped with rebreathers). Almost all are fitted with some form of power weapon, usually power claws or gloves, which sometimes have ranged weapons attached to them. Most are fitted with several injector implants and are pumped full of a lethal cocktail of combat stimms (notably Slaught and Spur) and bio-enhancers; their sanity is questionable, as the only life they can lead is one of constant battle and bloodletting.[2]

As a result of their complex cybernetics, weaponry, equipment and short life span, Chrono-gladiators are expensive and difficult to obtain.[1]