The Citadel Combat Cards are a family of card games that were released by Games Workshop between 1988 and 2017.[1][2] 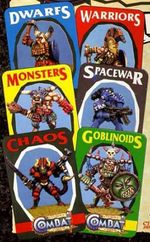 Originally in 1988 six different card decks with 35 cards each (plus rules and cover card) were released - four of them set in the Warhammer Fantasy universe (Warriors, Goblinoids, Dwarfs, Monsters) and two (Spacewar and Chaos) in the Warhammer 40,000 universe (the latter could possibly also be set in Fantasy as this is not clear from the miniatures pictured and many miniatures could be used in either universe). Each full-colour playing card features a photograph of Citadel Miniatures.[2]

Each set includes a fast playing set of standard rules that was printed onto the back of the blister the set was sold in (see below) plus a different bonus game in every pack (i.e. printed onto an extra card in the pack) and could be played on its own or with the other packs.[2] The bonus game was also referred to as "Advanced Game". The games were designed for 2+ players.[3]

Each card features a full-colour photo of a Citadel Miniature with the following game-relevant info:[3] 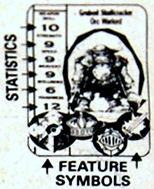 After the cards have been dealt out and all the players have their cards in front of them in a face down stack the owner of the pack takes the top card from his stack and picks a statistic. Each other player then places his top card on the table and the card with the highest value of the chosen statistic wins the round. All losing cards are removed as "killed" and put aside while the winning card returns to the bottom of the winner's stack. In the case of a draw all the cards with the highest statistic win and return to their owners. Then it is the next player's turn. The last player to hold any Combat Card wins the game. For longer games multiple packs can be combined.[3]

In June 1989 Jervis Johnson published rules for Attack! in White Dwarf 114 (UK), a "game for Citadel Combat Cards". This simple board game for 2-4 players required, apart from one or two sets of Citadel Combat Cards, a chessboard, plastic bases as used in the Talisman boardgame and dice. It was only with this game that the "feature symbols" mentioned above came into play (see below).[5]

In the classic 2 player-variant 16 cards are dealt out to each player, the players then proceed to pick one of their cards as the "general", the other 15 are "troopers". All cards are stuck into the bases and set up - 1 card per square - by each player in their respective halves of the chess board with the backs of the cards facing towards the opponent.[5]

Each turn consists of a "move" and an "attack". For the "move" the player can move one of their cards (not the "general" who may not be moved) up to two squares in any direction or combination of directions. An "attack" can only be directed at a card in an adjacent square. Only once the attack is declared are the two involved cards turned around so that both players can see them. Now both cards have to fight a "Duel to the Death" by comparing their "statistics" and rolling the dice, the losing card is "killed" and removed, the winning card remains and once again "hides" its identity. Then it's the turn of the other player. The player who manages to kill the opposing "general" wins the game. The game can also be played with three or four players, albeit with a more complicated setup procedure and more cards and material needed.[5] 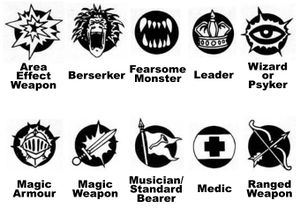 The "Special Abilities" in Attack![5] 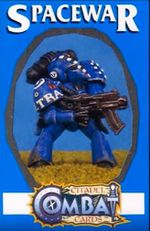 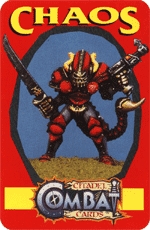 Only the Spacewar and Chaos sets featuring miniatures from the Warhammer 40,000 universe will be presented here, for the other sets please visit the Warhammer Fantasy-Lexicanum.

The Spacewar card set was was released in late 1988 and depicts miniatures from the Warhammer 40,000 armies of this period.[2],[4]. The "bonus game" (see above) included in Spacewar is called Deadly Doubles.[4] For more details see here.

The Chaos card set was released in late 1988 and depicts miniatures from the Chaos ranges of this period.[2],[6] It should be noted that the depicted miniatures in many cases could be part of the Warhammer 40,000 or the Warhammer Fantasy universes. The "bonus game" (see above) included in Chaos is called Imposter!.[4] For more details see here.

This edition of Combat Cards was released in 1995 and consisted of cards with pictures from a range of Games Workshop games.[1]

Five different card decks with 35 cards each were released - three of them set in the Warhammer Fantasy universe (Man O'War, Orcs & Goblins, Warhammer) and two (Epic Battles and Space Marines) in the Warhammer 40,000 universe. Each full-colour playing card again features a photograph of painted Citadel Miniatures.

Each set includes a card describing the standard rules, the "bonus game" option of the first edition was dropped.[7]

Each card features a full-colour photo of a Citadel Miniature with the following info:[7],[8]

Any number of players can participate in the game. All cards are evenly distributed and kept face down, excess cards are discarded. The owner of the pack then flips over his top Combat Card and picks a statistic, then each of the other players put their top card face up onto the table. The card with the highest value of the chosen statistic wins and goes back to the bottom of the winning player's stack, all other cards are "killed" and removed. In the case of a draw, only the cards with an inferior value are removed and all the top value cards return to the stacks of their respective owners. The last player to hold any Combat Card wins the game.[7] 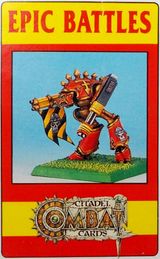 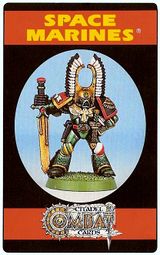 Only the Epic Battles and Space Marines sets featuring miniatures from the Warhammer 40,000 universe will be presented here, for the other sets please visit the Warhammer Fantasy-Lexicanum.

The Epic Battles card set was was released in 1995 and depicts miniatures from the Epic armies of this period.[7] For more details see here.

The Space Marines card set was was released in 1995 and depicts miniatures from the Space Marines Warhammer 40,000 armies of this period. The statistics used for playing the game are Fire Power, Combat Skill, Armour Value, Wounds, Speed and Bravery.[8] For more details see here.

This edition of Combat Cards was released in 1999 and consisted of cards with pictures from a range of Games Workshop games. It dropped the "Citadel" of the previous editions from the title.[9]

Each set includes a leaflet with the rules.[9]

Only the sets featuring miniatures from the Warhammer 40,000 universe will be presented here - for more information click the links under pictures below. For the other sets please visit the Warhammer Fantasy-Lexicanum. 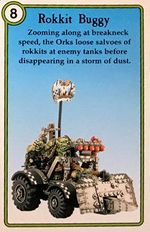 Each card features a full-colour photo of a Citadel Miniature with the following info:[9]

Each player needs his own deck of combat cards which he places face down in front of himself. He then draws a hand of five cards which he does not show to the other players. Each round the lead player places a "warband" consisting of one or more cards in front of himself. This is in turn repeated by each player until every player has a "warband" lying on the table.[9]

A "warband" must consist of at least one card with a coloured value number (red, green, blue, orange, yellow, light blue, light green, purple or pink) and may include any number of cards of the same colour. It is not allowed to include cards with other colours. A "warband" may also include a white so-called "bonus card" although there might never be more white than coloured cards in a "warband". If a player only has "bonus cards" on his hand he must discard one which scores zero. The value of a warband is calculated by adding up the values of all the included cards. The highest scoring warband wins the round. If two warbands have the same point value the warband containing more cards wins. Should there be multiple warbands with the same point value and number of cards the respective players play another round, i.e. they draw new cards until their hand is back up to five cards and play another round from the same lead. The winner of this new round also wins the previous round and normal gameplay is resumed. The winning player leads in the following round.[9]

Cards that were not played are retained and each player draws new cards from his stack until he again has a hand of five cards.[9]

The game ends when one player is not able to refill his hand anymore because his stack of cards is exhausted and the overall winner is the player who won the most rounds.[9]

Civil War variant (only for 2 players)

For this game variant one deck of Combat Cards is dealt out between two players with the spare card being discarded face down. Otherwise the game is played as described above.[9]

A new edition of Citadel Combat Cards was released in 2017.[1]