The Citadel Journal was a hobby-magazine published by Games Workshop and its subsidiaries. The first run of the magazine was published in the 80s as supplements for the first editions of Warhammer and other licensed games. It was relaunched in the 90s, covering the wide range of Games Workshop's games that were available at the time.

The original four issues of The Citadel Journal were released by Games Workshop from 1985 to 1987. They were published as irregular updates for The Citadel Compendium, an annual series of miniature catalogues for Warhammer and other licensed games. Apart from an overview of new miniatures and other Citadel products, the magazines offered hobby-related content such as background articles, painting advice, rules and scenarios. 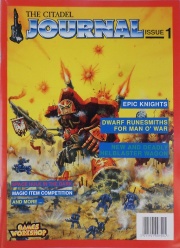 In 1994 the The Citadel Journal was relaunched and ran for eight years until it was cancelled in 2002 after issue 50. The new magazine started as a test and training ground for assistant game developers to learn their trade before moving to White Dwarf magazine and then to games development.[1]

The first issue launched with Gav Thorpe, Ian Pickstock and Mark Hawkins (who left after issue 5) at the helm. Their remit was to publish articles for all of Games Workshop's games, which then included Warhammer, Warhammer 40,000, Space Hulk, Space Marine, Mighty Empires, Blood Bowl and Man O'War. While White Dwarf was focusing more on newer releases, The Citadel Journal was meant to provide content to long standing hobbyists and their collections.[1]

After eight issues, Gav Thorpe and Ian Pickstock left for White Dwarf and the The Citadel Journal was handed over to Gav Tyler, James Funnel and Phil Lowe until issue 12. After that, the magazine was at the hands of the Mail Order team under Paul Sawyer and his assistant Alex Scott. Most notably, they introduced "Dok Butcha's Klinik", a showcase for gamer's conversions, which became the longest running column in the magazine.[1]

With issue 18, the format of the Journal changed: The magazine went down to a pocket sized format with a higher page count.[1]

After issue 22, Paul Sawyer left the magazine and became the editor of White Dwarf. With issue 23, the magazine was passed down to the newly formed Black Library and for a while it had no particular editor, only production staff and various names filled the gap, such as Rick Priestley, Nigel Stillman, Andy Chambers, Andy Jones and Jervis Johnson. The magazine continued the way it had since issue 18 until Steve Hambrook took over from issue 30 to 42.[1] 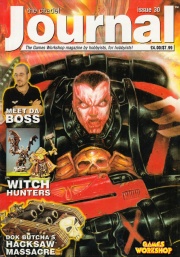 Hambrook, who had been a contributer since issue 21 changed the philosophy of The Citadel Journal. More room was given to the readers and the tagline "by gamers for gamers!" was added. Studio miniatures and terrain were banished from the magazine as the Journal was tasked with "keeping it real": Games were represented the way hobbyists actually experienced them, as opposed to the glossy and inspirational approach of White Dwarf and the studio. Room was given to games clubs by publishing their contact addresses, as well as a (rather unsuccessful) "Trading Post" column in which gamers could adverise, sell and buy second-hand miniatures and games.[1]

With issue 38 the newly formed Fanatic Games took over. Since Fanatic Press had begun to cover games other than Warhammer and Warhammer 40,000 in their own magazines (such as the Epic 40,000 Magazine and Battlefleet Gothic Magazine), The Citadel Journal was now focusing on the two main games. Articles were now geared towards "veteran" gamers, and frequently featured updates for older miniatures that were not included in newer Codices and Army Books, as well as variants for regular army lists.[1]

To include this disclaimer in corresponding articles include the following wiki-code: {{Fanatic}} which will auto-create the disclaimer displayed above.