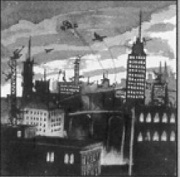 Image of the Civilised World

A γ-class[2] or civilised world is a classification of planet type in the Imperium.[2]

Of all the types of settlement in the Imperium, civilised worlds are the most common (although the term "civilised" here refers to their urban landscapes rather than to any pretence of social decorum[3].) On these self-sufficient worlds, the main population centres tend to be large cities or other urban environments that are supported by the planet's own agricultural production. The state of development both technologically and socially varies, but is most commonly around the current Imperial norm. Most adjuncts of the Imperial state will normally have a presence on the planet[1]. By the classification guidelines, a civilised world has a population from 15,000,000 to 10,000,000,000 and pays tithes between Solutio Extremis and Exactis Tertius[2].